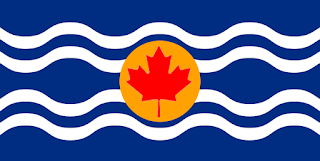 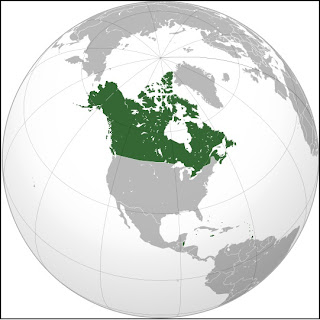 Introduction
A land of vast distances and rich natural resources. Russian Alaska was added in 1856 at the end of the Crimean War. Canada became a self-governing dominion in 1867 while retaining ties to the British crown. Economically and technologically, the nation has developed in parallel with the US, its neighbor to the south across the world's longest unfortified border. In 1962 Canada absorbed the West Indies Federation into its territory. In 1971 Belize also joined Canada. Canada faces the political challenges of meeting public demands for quality improvements in health care, education, social services, and economic competitiveness, as well as responding to the particular concerns of predominantly francophone Quebec. Canada also aims to develop its diverse energy resources while maintaining its commitment to the environment.
Geography
Location: North America
Area: 11,745,729 sq km (10,617,691 land, 1,129,038 water)
Coastline: 216,086 km

Climate: varies from tundra to tropical

Executive Branch
Head of State: Queen Elizabeth II (since 6 February 1952); represented by Governor General David Johnston (since 1 October 2010)
Head of Government: Prime Minister Stephen Joseph Harper (since 6 February 2006)
cabinet: Federal Ministry chosen by the prime minister usually from among the members of his own party sitting in Parliament elections: the monarchy is hereditary; governor general appointed by the monarch on the advice of the prime minister for a five-year term; following legislative elections, the leader of the majority party or the leader of the majority coalition in the House of Commons generally designated by the governor general.

Legislative branch
Bicameral Parliament or Parlement consists of the Senate or Senat (113 seats; members appointed by the governor general on the advice of the prime minister and serve until 75 years of age) and the House of Commons or Chambre des Communes (365 seats; members elected by direct, popular vote to serve a maximum of four-year terms)
elections: House of Commons - last held on 2 May 2011 (next to be held no later than 19 October 2015)
election results: House of Commons - seats by party - Conservative Party 174, NDP 112, Liberal Party 41, PNP 9, JLP 8, Carribean 8, Bloc Quebecois 4, Greens 3, Alaskan 3, UDP 2, PUP 1

Economy
Overview: An affluent, high-tech industrial society in the trillion-dollar class. Canada has a diverse economy with many similarities to the United States

Military Expenditures as portion of GDP: 1.3%

Transnational Issues
US works closely with Canada to intensify security measures for monitoring and controlling legal and illegal movement of people, transport, and commodities across the international border; sovereignty dispute with Denmark over Hans Island in the Kennedy Channel between Ellesmere Island and Greenland; commencing the collection of technical evidence for submission to the Commission on the Limits of the Continental Shelf in support of claims for continental shelf beyond 200 nautical miles from its declared baselines in the Arctic, as stipulated in Article 76, paragraph 8, of the United Nations Convention on the Law of the Sea

Guatemala persists in its territorial claim to half of Belize, but agrees to the Line of Adjacency to keep Guatemalan squatters out of Belize's forested interior; both countries agreed in April 2012 to hold simultaneous referenda, scheduled for 6 October 2013, to decide whether to refer the dispute to the ICJ for binding resolution; Belize and Mexico are working to solve minor border demarcation discrepancies arising from inaccuracies in the 1898 border treaty

Illicit drugs
illicit producer of cannabis for the domestic drug market and export to US; use of hydroponics technology permits growers to plant large quantities of high-quality marijuana indoors; increasing ecstasy production, some of which is destined for the US; vulnerable to narcotics money laundering because of its mature financial services sector

NOTES
1) The CIA World Factbook was an ideal reference when coming up with this post.
2) The Wikipedia article on the West Indies Federation was also of help.
3) The map image is a modified version of the Canadian one on Wikipedia.
4) The flag is a combination of the flags of the West Indies Federation and Canada.
Posted by Sean at 13:13 No comments:

I was going to post a couple of things this weekend but something came up. That something was a computer game called Victoria II. I installed it Friday night and spent most of the weekend playing around with it to learn tactics. First I tried it as the Zulu and after conquering the Orange Free State and nearly completing my conquest of the Transvaal the UK declared war on me. I abandoned that game.

My second attempt was playing as The Kingdom of Alaska. In order to play that nation I had to start as Russia, I released all of the 15 nations they could release. I released The Kingdom of Alaska last and opted to play it. Needless to say it was a somewhat boring game. I started with a population of less than two thousand and never got much above 5 thousand. Thus I had no military. It did give me a chance to learn how the technology developments worked even if I could not exploit them. I also had fun watching the AI nations fight with each other. Here is a brief report of the state of the world in 1936:

Over the century of game time I more than tripled my land area ---- however it was all just more tundra. Despite various plagues over the years decimating me I ended up having a higher population (thanks to the territorial additions). I started with 6,390 people (of who 1,590 were able bodied men) and ended with 22,270 people (5,560 able bodied men).

I also managed to hold an overall ranking among nations of 17th place at the end. At one point I was as high as 11th, that allowed me to colonize the rest of the tundra around me.

Since that experimental game I've tried a few other nation:
*New England: going with my theme of breaking a small nation off a great power to start. Put this one on pause after reaching Great Power status and accidentally getting into a war with France.
*Afghanistan: conquered two additional nations and took Zanzibar from Oman. Promptly lost Zanzibar to Portugal (and let me tell you those guys lost a lot of troops invading coastal Afghanistan and fighting my allies and myself before they won). Lots of rebel uprisings and government changes - Modernization looks impossible.
*Russia: Started by focusing on North America. Conquered Haiti as a staging ground to invade Mexico. Got numerous territories in southern Mexico and the Panama canal zone. When African colonization opened up I got over half the available territory! This game is on pause as I consider invading the USA!
*Zulu (second attempt): another underdog game. I conquered the Orange Free State and Transvaal having to free one of my starting territories to reduce infamy. Took Zanzibar from Oman. Just modernized --- after all of the rest of Africa has been colonized. Now seeking weak, friendless nations to conquer. (I'm having some weird bug in this game where my entire military completely vanishes despite full funding. Weird.)

That's a lot of game time - but it is a new game for me so I have a lot to explore. Still, I'll have to cut back on it a bit the next few weeks. I have a lot of projects I want to get done this summer.

In any case Victoria II overall seems like a great game. Looks like it has great re-play value. Well worth the money it cost.
Posted by Sean at 23:28 No comments: 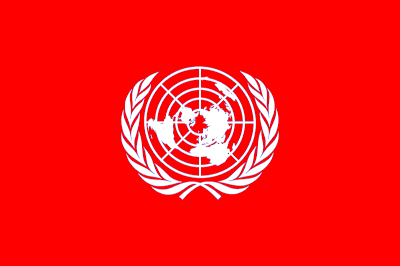 This week I've got a pretty straightforward flag. This is for a world where the United Nations has a lot more power, including having its own armed forced. Instead of using the normal, light blue UN flag their forces use this red flag. This is to help them differentiate between their civilian and military bases.
Posted by Sean at 05:00 No comments:

The flagship of the French Navy. The Richelieu is the first French nuclear powered aircraft carrier. The Charles de Gaulle has been under construction since 2007 and will become the second once it completes its shakedown by 2015.

ACTIVE SERVICE
Link 16
On 11 October 2001, the frigate Cassard, four (4) AWACS aircraft and the Richelieu were involved in the successful trial of the Link 16 high-bandwith secure data network.

11/9 and the War on Terror
After the terrorist attack on Paris on 11 September 2001 the Richelieu was deployed to the Indian Ocean as part of Operation Eternal Justice. The ship was made the centerpiece of the NATO fleet in the Arabian Sea allowing France to control many operations in the conflict. American forces took the French lead but were never under French command. Contre-Amiral François Cluzel was theoretically in command of the entire NATO fleet, but American forces were independent.

Air battle over Arabian Sea
On 9 July 2004 eight (8) Pakistani fighter jets (all F-7PGs) flew out of Pakistani air space over Arabian Sea. They were making a line for the French task force at top speed. Four French Super Étendard intercepted them before the fleet launched missiles. All of the Pakistani fighters were destroyed and one of the French jets went down after suffering damage. The French aircrew and two of the Pakistani pilots were pulled from the waters.

President Pervez Musharraf claimed that the air group was a rogue element not operating under authority of the government of Pakistan. This incident is seen as the primary cause of Musharraf leaving office in 2005.

Invasion of Libya
In 2005, after the tracking of additional terror attacks in France to Muammar Gaddafi, Operation Harmattan begins with a massive NATO air campaign on Libya prior to 100,000 American, French, and British troops making a massive amphibious invasion (the amphibious assault portion under American command as Operation Shores of Tripoli).

The Richelieu coordinated the air campaign during the ten day bombing campaign. Afterwards her aircraft were responsible for covering the French and British transports making the assault on the beaches. During this campaign four aircraft from the Richelieu were shot down by anti-aircraft.

Overhaul
In December 2007 the Richelieu's first major overhaul began. Numerous improvements were made including new propellers which increased her speed. New weapon systems and fighters were added as well. The refit was completed in January 2009.

Mediterranean Operation
From March 2009 to May 2012 The Richelieu stayed in the Mediterranean Sea. Its mission was to support NATO operations in North Africa. The United States had by this point taken over fleet operations in the Arabian Sea.

DIVERGENCE POINT
The divergence point for this universe is 1985. The Greenpeace ship, Rainbow Warrior, was not destroyed by the French who decided it might be too politically dangerous to do so. Prime Minister Laurent Fabius does not have to give a statement on the incident which is one of a number of events that hurt his career as Prime Minister. Without the Rainbow Warrior incident he may have held on to his position long enough so that the Richelieu's name would not be changed to the Charles de Gaulle. At least that is the concept, given my very limited knowledge of French politics.

Beyond that a more aggressive French military would be required for the other changes. Perhaps the change of the Prime Ministers would lead to the French having a much more active role in Desert Storm in 1991. Then al-Qaeda would have to determine that attacking France on September 11 would be of greater benefit than attacking the United States.... not a very likely outcome no matter what France did in Desert Storm and beyond. Perhaps this timeline requires a second point of departure.

REAL WORLD FOOTNOTES
This ship is known as the Charles de Gaulle in the real world. The source of the image for the ship is the Wikipedia article on the Charles de Gaulle. That article was used as the inspiration and basis for this post.
Posted by Sean at 18:36 No comments: