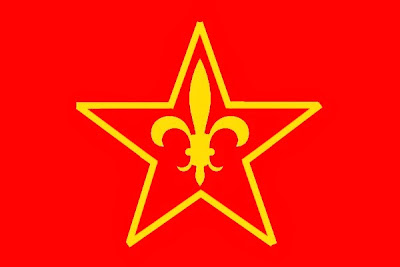 This is the flag of the Travaillis Republique Democratique. France fell to communism in 1926 and adopted this flag shortly thereafter. The flag was in use until the collapse of that government in 1953.
Posted by Sean at 05:00 No comments: 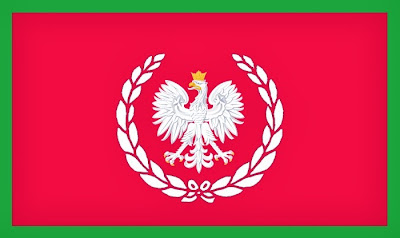 After recently finishing an online college class I took some time off and played Victoria II. One of my favorite things to do is to pick a major power and then release a smaller nation from them. This time around I released Poland from Russia. Surrounded by three great powers and having diminishing hopes of getting access to the sea and then being able to colonize Africa I took my entire army, got military access from Russia, and then conquered Khiva. Afghanistan followed a few years later, and upon seeing that the Chinese Empire fell to revolution I added Xingjiang to my growing territories.

I now controlled so much territory my colonial power score was in the red - I don't know if that has any affect on the game or not. When I was looking at ways to lower my infamy rating I noticed that one of the options for releasable nations was 'The Kingdom of Western Afghanistan.' That territory included all of my central Asian territory and would become civilized when formed. Not sure where else to take the game, I released the Kingdom and began playing as it - a country released from land released from another. 17 May 1868 is independence day in Królestwo Zachodnim Afganistanie, and they have been expanding since then, including a toe-hold on Africa.

Not liking the default flag Victoria II gave my new land I designed my own. It includes influences form the Polish, Afghani, and Khivan flags.

Do you play Victoria II? If so what sort of strange nations have you seen emerge from the game?
Posted by Sean at 05:00 No comments: