Friday Flag - Confederation of the Rio Grande and Texas 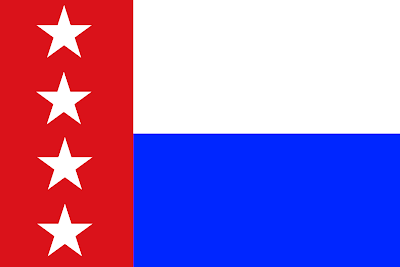 During the Battle of San Jacinto on 21 April 1836 Antonio López de Santa Anna was killed during the fighting. The war for Texan independence continued but the Mexicans suffered major setbacks after that battle. In 1837 another collection of Mexican states declared independence as the Republic of the Rio Grande. The battered Mexican Army gained made renewed attacks into the rebellious territory, but intervention by Sam Houston and his Texan forces secured the independence of the sister republic.

Having fought together against a common foe and facing an uncertain future together the two new republics formed the Confederation of the Rio Grande and Texas as a means to mutual defense and cooperation.

The flag of the Confederation has four stars - one for each of the states: Texas, Coahuila, Nuevo León, and Tamaulipas.

After the devastation of the Third World War the northern hemisphere was in ruins and the global weather patterns had shifted. The global economy suffered a catastrophic collapse leaving the surviving nations in chaos. Brazil made major changes in an attempt to avoid its own collapse. Surviving elements of the United States Navy would regularly use Brazilian ports in the years after the war. Since most currencies had collapsed the Americans had to pay for Brazilian help by helping their hosts maintain order.

As the turmoil began to slowly decline there was need of a stable currency to boost the sluggish economy. The Brazilain Real was experiencing extreme inflation and a loss of confidence. Local communities attempted to create their own currencies, some fiat, others based off labor. One of the more successful ones was the Certificado de Mercadoria (CM).

The CM was backed by the value of commodities that were supposed to be held in warehouses near major population centers. The certificates could be exchanged for the commodities listed on them at any time from these warehouses. This gave the certificates value and helped to counter the affects of inflation on the other currencies.

Every four to eight months a new series of certificates was issued. The new issue would have different exchange rates for commodities and some of the items listed on prior certificates would be removed while others added depending on supply. When a new issue was made older certificates were still good. This would lead to some confusion in exchanges but nobody wanted a currency that was only good for less than a year.

The Certificado de Mercadoria pictured above is from the second issuance of 1970.

The CM program was wrought with corruption, shortages of commodities, and other problems. However, it was still the most successful currency during in Brazil during the aftermath of the war. The last series for the CM was issued in 1981 and all outstanding certificates had to be redeemed by 1985 after the economy of South America recovered to a point where more traditional monies would function.

This particular 1,000 CM certificate was exchanged in São Paulo during July 1974 by a construction company for 1,700 kg of cement.

The inspiration for this certificate comes from the Exeter Constant. Some information on that can be found at The History of Local Currency and in an article at Mother Earth News, The Causes of Inflation and a Commodity-Based Currency.

I designed a more colorful note and created it for a post-WWIII Brazil that was attempting to survive the collapse of the global economy. I used bits of an old one silver dollar bill from the US, as well as a $1,000 and $100 bill for elements of this design. I also copied a portion of a Brazilian bill for the top logo. Some color changes and other tweaks completed the design. 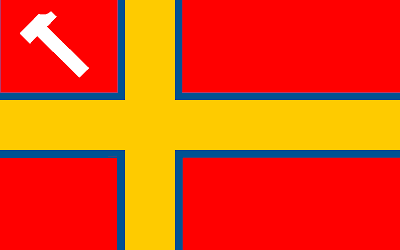 Sweden suffered greatly during the Great War. A British blockade and Russian invasion devastated the country to such a point that the government collapsed towards the end of the conflict in April 1896.

By the end of 1896 Sweden was proclaimed a People's Republic. The German Empire did not like having a communist country so close to it so they supported an Danish conquest of Ostlandet in a war from 30 January 1899 to 31 May 1899. During those few months Germany and Norway helped Denmark annex a portion of Swedish territory.

Germany and Norway again invaded the People's Republic of Sweden on 1 June 1904 to add a stretch of Swedish territory to Norway. Having never recovered fully from the Great War much less the Danish Conquest of Ostlandet, the Swedes were forced to surrender on 3 July 1905 with the loss of additional territory. The territory gained by Norway included Nord-Noreg and Trøndelag. 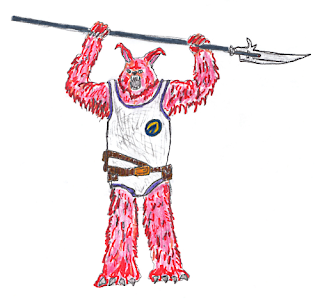 In the 1977 film, Uzay Savaşi, not much was revealed about the Kirmizitavşanan smuggler, Lokmaka. He never spoke Turkish, always communicating in his native language which sounded more like a rat squeaking than a fierce warrior. Despite this, his alien appearance, skill at fighting, and action figures make the big red bunny-man popular with fans of the film.

Much of the original history and background for the character was reveled in the novelization of the film. He grew up on the planet Kir'Kirmiz to one of the equatorial tribes. His larger size and strength allowed him to maintain some freedom in the harsh lands of his people, but he never felt the desire to become the chieftain. He was also intelligent and did not see the point of becoming the ruler of his trim when all the tribes of Kir'Kirmiz were slaves of the İmparatorluğun.

He fled his home planet and acquired his own small transport ship. He become a smuggler, bringing weapons or forbidden luxury items to the desperate people of İmparatorluğun space. During these years is when he first encountered and befriended Berkant, a member of the Blue Stars. He also obtained his favorite weapon, a battle glaive with a built-in laser gun.

Lokmaka's portrayal in the other two films of the series was not much different than in Uzay Savaşi, a loyal friend with no major character developments on screen. The lack of ability to speak so so the audience could understand him was the main factor leading to the shallowness of his character. Where he failed as a character in the films he thrived in comic books and novels, remaining a favorite of many fans. 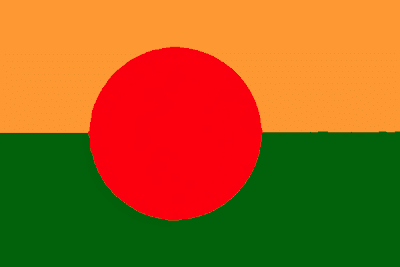 I sifted through my old notes for tabletop role-playing games I have run in the past looking for any flags I may have designed. I found an old version of this one, the Republic of Bangladesh. The world it come from is totally ASB. It was a game where the players were super-powered villains with various nefarious plans. In the mid-1990s China and the US went to war leaving them both, and western Europe, nearly totally destroyed. The Russian Federation became the anchor for civilization for a number of years.

During this time Bangladesh had more than its fair share of super-inventors. They could take scrap out of a junkyard and turn it into wondrous technological devices. It did not take long for them to dominate southern Asia and eventually northern Africa. 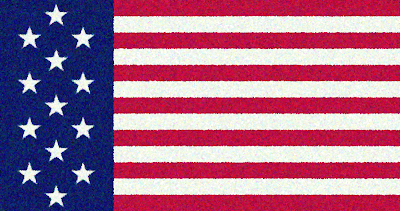 Welcome to this week's alternate history flag. Given that it is Independence Day here in the USA I decided to create an alternate flag for America. At first I considered one with an additional stripe and star for a timeline where Quebec was successfully added to the new nation, but instead I went with the theme of just changing the layout of the original flag.

Upon completion I found it bears a striking resemblance to a flag designed by John Shaw, his having eight-pointed stars instead of my five-pointed. Shaw's flag also had different dimensions, being a bit longer than most standard flags.

I hope all my readers, no matter which country they live in, have a great day and an even more awesome weekend!

Thought it would be interesting to take a look at some of the blog's stats for the last month.

LOOKING FORWARD
I'm planning to do some more book reviews this summer. I'm making notes as I re-read portions of alternate history fiction I've read over the years.

I have a few more timelines to develop. It's taking a little longer than normal because I'm doing some extra research to make them a little more believable.

My new cartography software has a bit of a learning curve. Hopefully I'll be able to make some nice maps later this year.

Also, I want to further develop existing timeines I've created here. Are there any that you find particularly interesting? If so leave a comment and I'll consider pushing them up the list of things to do.