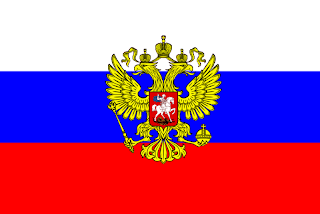 I designed this flag many years ago. Basically it's a Romanov crest on a modern Russian flag. I originally designed it for a world where the United States, China, and most of Europe were devastated by a war (in December 1993) that Russia somehow managed to avoid. Russia became one of two dominate powers on Earth after that and nostalgia for the 'good old days' led to the addition of the old crest to the flag.

Not much of an alternate history, but it was for a super-hero role-playing game so realism wasn't that important.