INTRODUCTION
I have a tendency when playing Victoria II to release odd nations from larger powers and play them. For example Australia from the UK, the Cherokee form the USA, Java from the Netherlands. This time I played Poland, releasing it from Russia.

Poland was difficult to play. It was surrounded by three great powers and had no access to the sea. My favorite part of the game, the colonization of Africa, would most likely be missed by my weak, land-locked nation.

I looked for areas to conquer. I had to look far. With military access granted by Russia I moved the entire army of Poland to conquer Khiva. My conquests of central Asia had begun. After a number of successful campaigns and expanding Polish Asia I decided to release my conquests as a new nation; The Kingdom of Western Afghanistan.

1807: Duchy of Warsaw is created thanks in part to the help of Polish on the side of France against the Russians and Austrians during the Napoleonic Wars.

1815: Congress of Vienna brings about an end to the Duchy of Waraw.

29 November 1830: Beginning of November Uprising in Poland. (Divergence Point for this universe is during this uprising)

1 January 1836: Poland is given independence from the Russian Empire.

1836 to 1868: Poland gets permission from the Russian Empire to send most of its army through Russia's territory. They begin to conquer areas of central Asia. Khiva was the first to fall to the Polish army whose leadership was filled with minor nobles attempting to gain influence and favor in the new Polish monarchy.

Afghanistan was conquered during a pair of wars. These wars were long and brutal. The Polish forces were cautious and used the terrain to their advantage and allowed their superior weaponry to decimate the Afghan forces. Rebels will occur on a regular basis for years.

Finally, with the collapse of central authority in the Chinese Empire a friendless and isolated Xinjiang was easily annexed.

17 May 1868: Królestwo Zachodnim Afganistanie is given independence from Poland. With the size of the colonial territory and the growing troubles in Europe it became more efficient to create this new nation in central Asia. 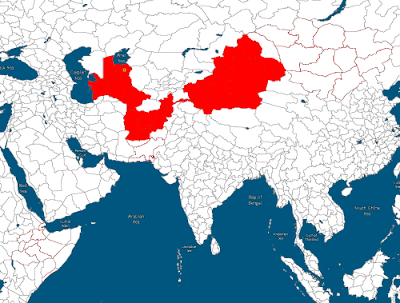 The military culture that gave birth to this new nation pushed it to expand towards the sea. Seven wars would be fouth over the next 22 years:
1) Conquest of Kalat - march to the sea
2) Conquest of Makran - coastal territory on the Arabian Sea annexed
3) Sneak attack by Persia - The low number of KZA troops recovering form fighting two wars and charged with defending a large area of land are attacked by the vastly larger Persian army. Defensive fighting in the mountainous terrain and superior weaponry allow for eventual white peace with Persia.
4) War with Oman to annex Mogadishu
5) War with Ethiopia to conquer the southern half of that country
6) Conquest of Mongolia with the aid of the Russian and Ottoman Empires.
7) Aiding Russian Empire in its war with the Ottoman Empire - victory for Russians as they seize some Ottoman territory along the Black Sea


1890: With Mongolia added to its territory the KZA is a major player in Asian politics. It ignores Europe as it strengthens ties with Japan and Guangxi in order to keep expected Chinese agression in check. It is expected that within the next five years China will westernize and with its huge poplulation it will be a powerful rival of the KZA. 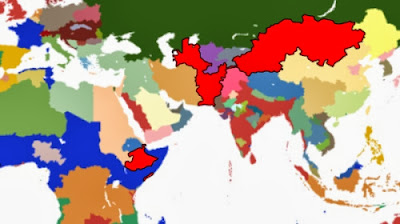 
Future expansion in Asia looks less and less likely. Withe the growing power of China, British influence in India, and ever-increaseing spheres of influence of the Great Powers future expansion may be limited to the Middle-East. Possible future conqusts that would make the most sense in that scenarios are Yemen and Oman, that would allow the entire Kingdom to be better untied geographically.

Access to the coastal areas of the far east would be nice, but very difficult to acquire. Revolution in Manchuria which destorys its existing alliances might provide an opportunity for invasion. An alliance with Japan to take more territory from China could provide some high-value territory as well. It would be nice to have expansions into China be contiguous with my existing territory, but the oceans will make any separte coastal area easily accessible via a navy I'll have to get around to re-building.
Posted by Sean at 19:52 No comments: