I'm finally learning to play Europa Universalis IV. I had a couple quick games I gave up on where I made some mistakes. I thought playing Ming would be easy, but not knowing the rules made it harder. Then I decided North America might be more my style. I tried the Iroquois but for some reason my armies could never recover as quickly or get as large as my neighbors so I quickly gave that game up.

Finally I decided to give the Navajo a try. After what I learned playing the Iroqouis I figured this would be the best nation to play to learn some of the more basic rules of the game. By the time I had to save the game this last weekend this is what I had: 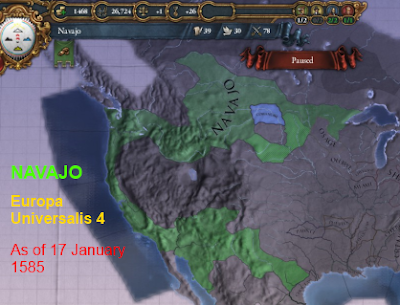 This map is as of AD 1585. In some ways impressive. My economy the first half if the game was terrible. Low value territory until I hit the Pacific coast. I cautiously annexed small tribes around me with overwhelming force. Now I have two colonial groups out at a time expanding towards the Great Lakes and Gulf of Mexico.

My quaint little concerns right now involve feared aggression from the Aztecs but really having no signs it is coming. What should actually concern me is the eventually arrival of the Europeans. No sign of them yet, but I don't have a clear view of the Caribbean.

I wish I took some better notes on this game. I may have been able to create a proper AAR from it. It is mostly a practice session and will last until I get obliterated by the Europeans.

On this world the Toba Catastrophe took place in 70,114 BC. This event created an evolutionary bottleneck in numerous species as their numbers dwindled during the six years of winter that followed. In the aftermath of this event on this timeline homo sapiens would quickly share the Earth with a second fully sapient species, the Lophrotus, a divergent species from Orangutan in the aftermath of the Toba eruption.

HISTORY
The city of Gohk'Ra was founded on a large island that would eventually take the same name (Borneo in the OTL). It was the center of the first civilization created by the Lophrotus. The founding of Gohk'Ra is used as the basis of the calendars of the Lophtus people, while the exact date is lost to the mists of history the calendar starts on the equivalent of 4002 BC in the original time-line.

In circa 2200 GC the Swarnabhumi Empire was formed. Human incursions into Lophrotus lands aided the various island tribes in uniting. The empire would reach its height in about 2700 GC, even controlling some of the jungles of Southeast Asia. Their chief rival during this later time was the Kingdom of Mahajanapada in south Asia. A strong rival to humanity aided in the growth of a stronger central authority on the sub-continent of India. 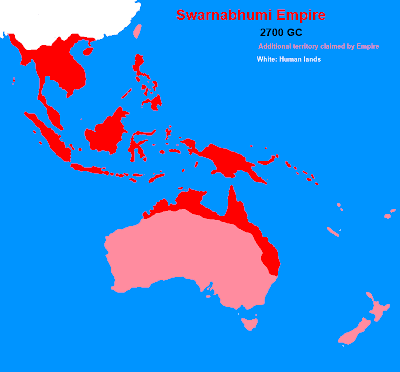 Given geography of their homelands and their own biology the Lophrotus became the earliest seafaring power on Earth. Control of the seas around their territory kept the Lophrotus safe from major invasion of humanity. They leveraged this power in their own expansion into the jungles on the continent. The rivalry between these two sapient species would continue for thousands of years.

GOVERNMENT
While called the Swarnabhumi Empire this political entity was more of a confederation of city-states by a pro-trade central authority. While economics was not as developed as it would be many centuries later, attempts were made by the authority to facilitate trade and mediate disputes between the Lophrotus tribes. The main purpose of the Empire would be to create a navy and army to hold back human expansion. By 2700 GC, after five centuries of growth, it truly became an empire. The citizenry was left relatively alone except for levies and taxes, but a powerful military existed in its northern and western reaches.

The military is bronze-age. Spears, bows, bolas, and swords are the most common weapons. A typical Lophrotus soldier wears less armor than their human counterpart. They prefer to keep the weight of equipment down and like to keep a wide range of motion available since they still climb trees. They are even developing their own martial arts to exploit their own racial advantages and exploit human weaknesses.

ECONOMY
Tin, copper, and gold are natural resources of the early empire. While humans first invented bronze the Lophrotus quickly copied it and have abundant supplies. Early farming techniques were poor with the foods available but as sea travel became more common fishing became a major industry. With the stable food supply from fishing the Lophrotus population began to grow.

The lumber and oil resources are being adapted for ship building. Many other resources of the region will become more valuable in future centuries as technology progresses. Many communities also have thriving bone carving and primitive textile production.

On an individual level the economy is still a bronze-age barter system. Trade between cities or other sections of the 'Empire' use gold and sometimes copper.

RELIGION
As with human religions there is a wide range of deities for various concepts, cities, professions, etc. The most popular deities are those which embody trees or the sea. Their god of evil and tyranny, Zareerin, has a very humanlike appearance.

NOTES
Sixty-thousand years is probably a long way off of the time needed for orangutans to evolve into the Lophrotus. But I didn't want to create a random divergence point set millions of years ago. I wanted to set a specific date to the Toba Catastrophe and play around with both human and orangutan history.

Maybe I'm just looking forward to this year's Dawn of the Planet of the Apes. Just classify this one as ASB.

The name lophrotus, which the species named itself, I took from a synonym for orangutan from 1813, Lophotus - which I then discovered is now used for a genus of crestfish. I took the name, added an R and that was that.

The name of the empire, Swarnabhumi, was taken for a name of Sumatra in Sanskrit ("Land of Gold"). Some cross-contamination linguistically between species or random chance lead to the name in the timeline.
Posted by Sean at 17:55 No comments: 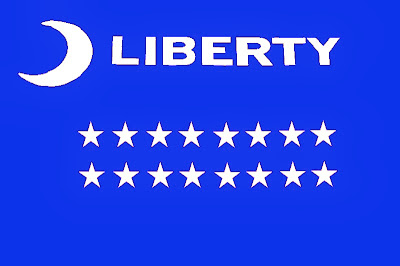 After the election of Steven A. Douglas as President of the United States a number of northern states seceded and formed the Federation of Free America (FFA).
Posted by Sean at 06:00 No comments:

The Blue and the Green - Road to Secession

In 1861 sixteen northern states seceded from the Union as a response to the election of Steven A. Douglas as President. Decades of regional strife in Congress built up resentment in the North to harsh and invasive fugitive slave laws built the foundation of secession. 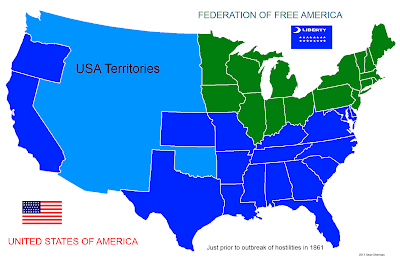 The trouble can be traced back to the counting of slaves towards representation in Congress. There were many arguments during the Convention over the issue. Eventually the slave-holding states agreed to pay any eventual Federal taxes on these slaves. The taxes never came.


The Missouri Compromise of 1820 excluded slavery north of the parallel 40°37′N (the northern boundary of Missouri). With this more northern compromise there would be no 'Bleeding Kansas.'

A stronger Southern influence in the House of Representatives allowed for harsher fugitive slave laws. Federal agents were now in northern states capturing runaway slaves despite the local laws prohibiting slavery. Abolitionist groups became even more radicalized and occasionally these Federal agents would become victims of vigilante groups in rural areas of the north.

Actions by the more violent elements led to more and harsher laws. The northern states were becoming increasingly upset at dictates from Washington. A number of Whig governors in the 1850s began to secretly conspire against the enforcement of Federal slave acts and other Federal laws they disliked, but not all Whigs agreed with these sorts of actions. The split in the Whig party allowed the radical Republican party to gain more power in the north.

The 1860 Presidential Election was one of the closer ones Stephen A. Douglas won with 167 Electoral votes to Lincoln's 149. The most surprising results were Indiana and Illinois which were both free states that went to Douglas. Douglas won Illinois by a little over 3,000 votes and Indiana by over 8,000.

The northern states saw no other way to free themselves of immoral laws of the Federal government than secession. In January 1861 most of the New England States voted for secession followed quickly by New York. By the end of February the remaining states joined.

I've been happy with this blog overall. The last few months have been a little chaotic for me so posting has been nearly non-existent but I hope to change that in 2014.

I have a number of posts that are my favorites for 2013 but I've decided to list the ten that had the most page views for the year:


Out of those top ten my favorites are Greater Canada and the Confederation of European States.

In the coming year I plan to expand a couple of my existing alternate timelines as well as creating numerous new ones. I'll also be getting creative and making new flags for upcoming Fridays.

Also in consideration is a series with summaries of the sessions of my long-running GURPS Alternate Earths campaign. All sorts of interesting new worlds were explored - however a number of them were either near future or had magic and/or psionics and other Alien Space Bats content. It could be an interesting series to do in any case.