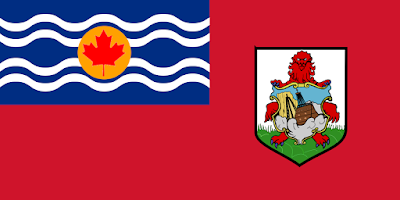 Canada continues to grow with the addition of Bermuda on 1 July 2014. It is currently a territory but is expected to become a province before October 2019. Bermuda is a strategic location for Canada as a good mid-point between the mainland and her Caribbean and Central American territories.

The transition to its new status has gone well for Bermuda. Queen Elizabeth II has approved of the merger. Charles, Prince of Wales was in Bermuda on 1 July for the ceremony.

Major changes in Federal politics are not expected. With only 63,000 people even combined with the existing West Indies and Belizean citizens, there should be no major change in the House of Commons or Parliament. 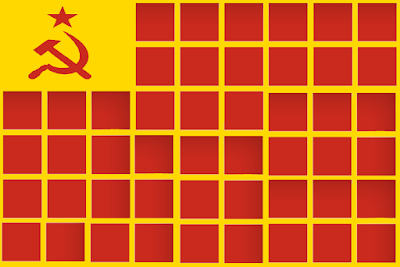 Still plugging away at my NaNoWriMo project for this year. Still it's time for a new flag. Here is a flag for a communist United States. I have no real background for it, mainly because I can't come up with one that is even a tiny bit plausible. So no extra writing is required and I can get back to my novel.

The red blocks each represent one of the 48 states. I was inspired in the creation of this flag on something I saw online somewhere, I think it was the People's Cube. Enjoy.

NaNoWriMo and a Map

November is National Novel Writing Month (NaNoWriMo). I’m working on a steampunk story this year. I have the story set in an alternate history. With the development of steampunk technologies the French Empire had some fancy artillery, possibly with targeting controlled by analytic engines. This technology superiority allowed them to defeat the Germans in the Franco-Prussian War.

Now Germany is broken into a number of separate states. Bavaria a French puppet, Hanover dominated by the British, and Saxony falling quickly into the Habsburg sphere. The demilitarized Westphalia region is seeking independence from Prussia. A bit of a mess in Central Europe.

A strong French Empire helped to keep Rome as a Papal State, not having it annexed into Italy. There will be many other differences as I work on the story.

Here is a nifty map: 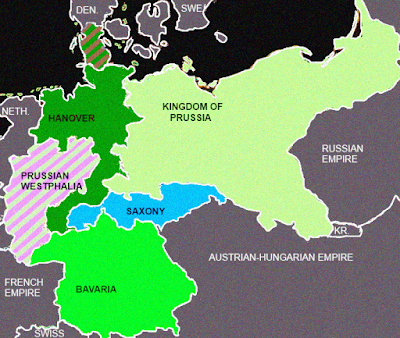 As I said it will be a steampunk story. No supernatural creatures, magic, psionics, faeries, or vampires will make appearances. It will also focus on some of the ‘punk’ elements so many stories ignore. No adventuring nobles as the main character doing everything for Queen and Country.

It will be a fun project, but it will need a lot of clean-up. Writing 50,000 words in 30 days while still working, gaming, and taking care of other responsibilities can be tricky. They key is to write and worry about editing or changing things until afterwards. Very rough draft.

If it ends up being any good I’ll see about getting out there somewhere for people to explore.