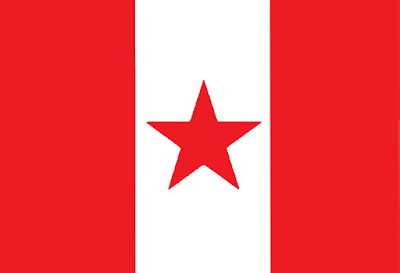 During World War II the United States focused on battling Japan and attempting to retain territory lost in Asia. By the end of the war the Soviet Union pushed through all of Germany and into Northern Italy.

North Italy was quickly founded in 1947 as a communist state with South Italy an American proxy. Five years later the North invaded the South. North Italian, Polish, Czech, and a token German force crossed the border moving towards Rome. After being initially pushed back the allied forces (South Italy, USA, UK, Spain, and Turkey) got organized and pushed back. After nearly three years of fighting North Italy was defeated and occupied by the Allies.

The United States pushed for re-unification of Italy. The Soviets were not willing to escalate the situation over a small bankrupt country. Their nuclear program and delivery systems were still far behind the West and they needed time before any full-scale confrontation. Italy was reunited in 1955 and the flag of North Italy was retired.

Happy Back to the Future Day

Happy Back to the Future Day..... and be thankful we don't live in that horrible future.

Flying cars, self-lacing sneakers, hoverboards, self-drying clothing, weather control, lots of cool stuff was depicted for the world of October 21, 2015 in Back to the Future II. However I haven't heard any mention of the most terrifying thing about this bright and colorful future; the lack of lawyers. Doc said: "The justice system works swiftly in the future now that they've abolished all lawyers. " That future is a terrible tyrannical world.

Lawyers get a bad rap. Sometimes they really deserve it. However in a free society lawyers are needed to help protect the innocent (and guilty) from the power of government. A world with instant justice and lack of police investigation of crimes is an evil place. Griff Tannen is a bully, thug, and was planning a crime but he ended up being imprisoned just for damaging the courthouse. Prison seems to be a harsh sentence for accidentally breaking some windows.

A totalitarian police state is not my idea of a great future, even with hoverboards.

I wish I could point to some things that show the alternate 1985 where Biff controlled Hill Valley wasn't as bad as it seemed. There was not enough information to show if the rest of the world was in a similar state. Who knows Marty's in that timeline off in boarding school might have led to a much better future. At least gambling was made legal in California.

The timeline changes in the trilogy were always fun and interesting. However the most terrible one for Marty was never addressed. That being the one at the end of the first movie. His entire life was changed. All of the memories of his family were no longer accurate and he now lives with complete strangers who inhabit the bodies of the family he loved. His name really shouldn't have been Marty anymore, his parents would have named their eldest son Marty. When our Marty became a teenager his father may have even divorced his wife after seeing that his son looked a lot like that Calvin Klein fellow they knew back in the day, and assumed that Lorraine had cheated on him with Klein. His mother would have then slipped back into alcoholism and possibly died sending the teenage Marty into foster care never to meet Jennifer...... In Star Trek Commander Spock would have been from some other planet and Star Wars' Darth Vader would have had a different name all because some writer named George McFly wrote a novel about Darth Vader from the Planet Vulcan in 1962.

Of course I'm over-thinking things a bit. I'm also drifting from the original point of the post: be thankful we didn't end up with the future portrayed in Back to the Future II.
Posted by Sean at 21:24 No comments:

Email ThisBlogThis!Share to TwitterShare to FacebookShare to Pinterest
Labels: Back to the Future 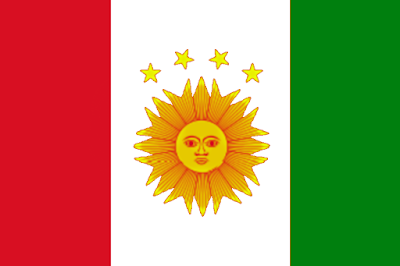 After years of civil war and then a war with the United States the nation of Chile was in a weakened state. On 3 June 1884 Peru and Bolivia both declared war on Chile to reclaim lost territory. Despite Chile's weakness Peru and Bolivia were only in slightly better shape, having not fully recovered from the War of the Pacific. It took nearly two years for territories lost in the War of the Pacific to be recovered.

When the so-called Second War of the Pacific ended in 1886 Peru and Bolivia moved to enhance their security and further cooperation by forming the Second Peru-Bolivan Confederation. Andrés Avelino Cáceres became the first president of this new state thanks to his victories as General of Peru's armies during the Second War of the Pacific. He had to deal with the huge debts created by the two wars and integrating increasingly disruptive rebel groups into the new nation.

An agreement was made to eliminate the debt by giving control of its railroads and other concessions. It was a very unpopular move, but the nitrate deposits in the recently recovered territories would help the economy once they were running at full capacity again by 1888.

Peru-Bolivia would continue to suffer insurgencies, rebellions, and a shaky economy for years to come. The future threat of a revitalized Chile one day invading was another threat.