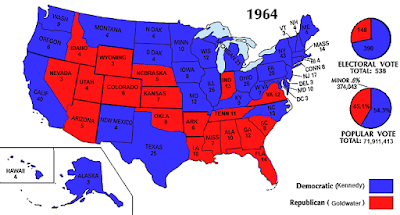 November 3, 1964 saw an above-average voter turnout. President Kennedy retained his power. Despite his loss, Goldwater continued to try to change the Republican party.
Posted by Sean at 13:22 1 comment: 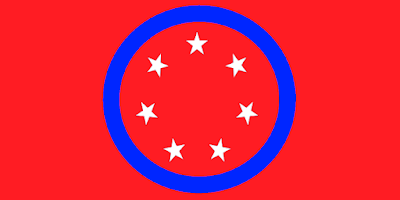 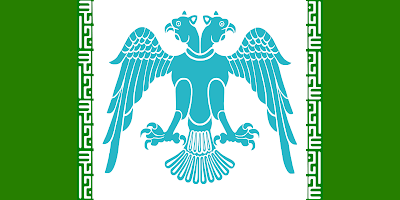 Both Theodore Roosevelt (former US President) and Samuel Gompers (president of the American Federation of Labor) were invited by Hamilton Fish to meet a delegation from Kerensky’s government of Russia. During the event Gompers defended the racial violence initiated during the strike in East St. Louis. Black strike breakers and their families were attacked. Over 6,000 blacks were driven from their homes and over 200 were murdered.

Roosevelt was outraged by the savage killing of Americans and called for justice for the slain. Gompers blamed the corporations for bringing in the [African-Americans] to break the strike. The strikers warned the corporation that trouble would follow (which showed some pre-meditation of what was to follow).

The argument between the two became heated as Roosevelt stood and shook his fist in Gompers face. Gompers also stood as the war of words continued.

“I will go to any extreme to bring justice to the laboring man, but when there is murder I will put him down.” Roosevelt was quoted as saying. 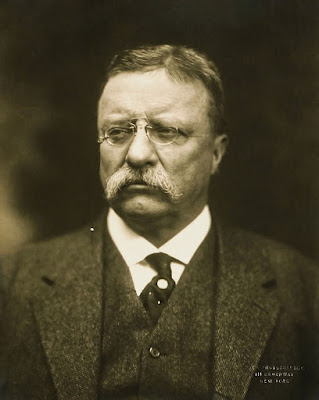 The confrontation turned violent as it appeared to the labor supporters in the gallery that Roosevelt struck Gompers. They charged down onto the stage, bringing Roosevelts supporters up in an attempt to stop them.

The ensuing mêlée Mr. Roosevelt received two broken ribs and a broken nose. However his worst injury was suffered when he was pushed off the stage, shattering his hip. His death two days later would lead to riots across the northeast and west coast. The landscape of American politics would be changed for decades to come.

The South would actually become more pro-Labor while the North would push Civil Rights leading to marches and demonstrations in the late 1940s. Regional politics would remain strong weakening party politics.

Many would wonder what would have happened if Theodore Roosevelt had survived to run for President again in 1920.

Friday Flag - The United Kingdoms of England and France 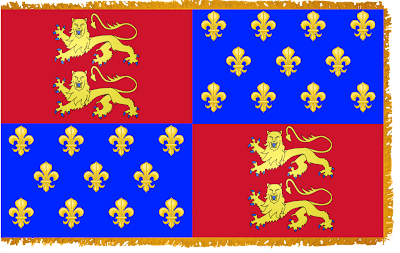 In 1120 William Adelin survived the wreck of the White Ship. He went on to become King of England continuing the line of the House of Normandy. There would be no succession crisis as William III took the throne in 1135 at the age of 32. England remained stable and William III produced an heir.

War with France in the early 13th century allowed for expansion of England's territory. The Anglo-French War of 1201 to 1212 was waged by King Robert III, and was a decisive English victory. Phillip II of France was killed in 1212 and his son Louis VIII became King of what remained of France.

The Albigensian Crusade allowed the English to complete their domination of France as they crushed the Cathar in the name of the Catholic Church. In 1228 Louis VIII lost his throne as France became part of the Kingdom of England.

Well, NaNoWriMo is over. Didn't hit 50,000 words due to distractions at work and the need to do some more research. I'll be putting that steampunk story on hold as I prepare for a new tabletop RPG campaign for next summer.

At first I was planning to run a science fiction campaign, something like Eclipse Phase. I've been burning out on all the fantasy and D&Dish stuff we've been playing. However, an alternate history timeline I was working on seemed it might be a fun place to adventure especially in a in a gritty version of GURPS with no magic or psionics allowed.

Two of my players are interested, I still have to check with the others. I was working on a timeline where the native tribes of North America ended up being stronger. Having only one divergence point I've been working on the basis of what will hopefully be a mostly plausible scenario.

Given the great divergence that would take place in modern history my outline started getting a little stuck in the late 16th century. That also happened to be a great time for a group of "adventurers" to explore things and get a firsthand look at this world. Hopefully a long enough campaign will allow me to flesh out this world enough to extend its timeline to modern day.

Now that a basic rules system is set and the basic historical outline is being developed I have to now work on maps, technology, and other aspects of the world. Things such as calendars, currencies, and new names for places are going to fill some of the spare moments I'll have between January and April.

I'll post interesting items related to this game's history and setting to this blog as they are developed. I may even post a synopsis for each game session after we play them.

....or maybe the players will get fed up after too many of their characters get killed or maimed in a gritty world with no modern medicine or magical healing available. Might do them some good after our recent overdose of the Pathfinder RPG.