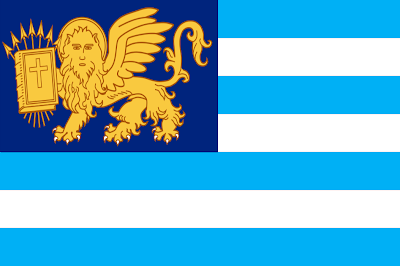 Flag of the United State of the Ionian Islands 1815

During the Congress of Vienna the United Kingdom wanted to gain rights to 'protect' the United State of the Ionian Islands. This group of seven islands off the coast of Greece had a number of ports that could be of use by the British. The Austrian Empire was not thrilled at the prospect of continued British expansion into the Mediterranean so they unexpectedly pushed for more rights there themselves.

With the numerous more important issues to be handled at the Congress, it was quickly decided that the British and Austrians would form a condominium over the islands. It quickly became apparent that the two powers would be unable to cooperate. This allowed the Ionians to exert much more control over their own territory. In late 1815 Ioannis Kapodistrias became President of the United State of the Ionian Islands. He became adept at playing the two powers against each other and advancing his own ends as they squabbled or ignored the islands.

While many inhabitants preferred British laws to Habsburg they desired their own freedom as well. Taking the best each culture had to offer and taking inspirations from ancient Greek city-states and modern American political innovations the tiny new nation tried to create its own identity.

In 1864 the British pushed to have the Ionian Islands annexed into the Kingdom of Greece. Luckily a half-century of relative independence allowed them to resist annexation. With Habsburg involvement now almost non-existent the Ionians turned to Imperial Russia for help. Turning to the Tsar to ensure their freedom was bizarre, but worked. By allowing Russian access to some of their ports they were able to get the Tsar to support their independence.

Again the United Kingdom had other more important interests to deal with and eventually let the matter drop.

The Chairman of Council of Ministers of the Russian Empire, Pyotr Stolypin, having survived an assassination attempt in 1911 continued his duties. He would attempt to steer his nation away from war in November 1912 but fail.

The Balkan War was in full swing. Bulgaria was leading Serbia, Greece, and Montenegro on successful campaigns against the Ottoman Empire. Germany and Austria-Hungary were remaining relatively uninvolved in the conflict. The Kaiser was still upset over the overthrow of his friend, Sultan Abdul Hamid II in 1909. Germany would follow a policy of "free fight and no favor", allowing the conflict to play itself out. Despite Serbian gains in the area, including gaining access to the Adriatic were threats to Austrian power in the region the Austro-Hungarians did not mobilize and enter the fight.

Seeing the lack of Austrian involvement as weakness, Russian Minister of War Vladimir Sukhomlinov saw an opportunity to move against the Turks and have a chance at finally seizing Constantinople. Russia could not afford to allow the city to fall into Bulgaria's hands. On 22 November 1912 Sukhomlinov prepared plans for a 'partial' mobilization of Russian forces from Warsaw through Kiev and all the way to Odessa. They could move into the Balkans and either 'aid' the Bulgarian faction and claiming Constantinople for Russia, or they could crush the Balkan armies and seize the city anyway.

The next day, 23 November, the Tsar called an emergency meeting of his most important ministers. There were to discuss Sukhomlinov's plan and other options available. Chairman Stolypin warned against the mobilization. He felt that the Austrians would see it as a direct threat and mobilize themselves. At that point war with the Turks, Austria, and even Germany would be a real possibility. 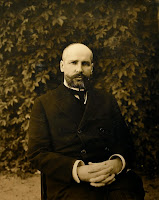 While a number of other ministers were in agreement with Stolypin's position he was growing increasingly unpopular due to continued pushes for reforms. The same unpopularity that led to the attempt on his life a year earlier kept enough ministers from siding with him to defeat the Minister of War's plan. In a narrow decision the Tsar and his ministers decided on a partial mobilization against the Ottoman Empire and possibly Bulgaria.

Russian mobilization began 24 November (7 December 1912 Gregorian Calendar). The Austrians would react. Mobilizing their military forces to deploy against the Bulgarian alliance and to reinforce border regions with Russia, in particular Przemyśl Fortress. It would not take long for war to spread.

Information on the historical figures can be found on Wikipedia or by using Google, Bing, or whatever search engines you like. I used a couple books as reference when plugging away at this timeline:

1) The Russian Origins of the First World War by Sean McMeekin
2) Blood on the Snow by Graydon A. Tunstall