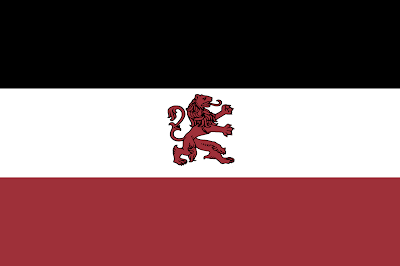 With the victory of the Central Powers in the Great War the German Empire established the new country of Kurland. This German puppet included the cities of Riga in the north to Brest-Litovsk in the south. The islands of Ösel and Dagö.

Inspiration for this flag came from the Atlas of World War I by Martin Gilbert (ISBN 0-19-521077-8). On page 46 was a map of 'German War Aims In Eastern Europe 1914-1918' which showed Kurland, a tiny landlocked Poland, and Ukrainian People's Republic.

The lion rampant is from the coat of arms of Courland. The colors are from the German and Latvian flags.

The ascendancy of Chile after the War of the Pacific also lead to an increase in tensions between Chile and the United States. The 1885 Panama Crisis was one example of this tension. During the Chilean Civil War of 1891 the Itata incident saw the US seizing a ship carrying weapons to the Congressist faction in the conflict. The US was attempting to increase its influence in Chile by supporting President José Manuel Balmaceda.

Balmaceda lost the war to the Congressist faction. A month after the war was over the USS Baltimore arrived in the Chilean port of Valparaiso. On 16 October 1891 outside a saloon in Valparaiso an American sailor spit on a picture of a Chilean hero. In the resulting riot two US sailors were killed and over a dozen were injured. Many of the sailors involved were arrested by the local authorities. The new Chilean government, already upset with US actions during the civil war, rejected all of America's protests. 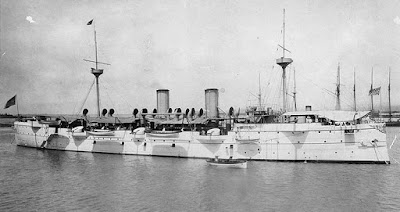 Secretary of State James G. Blaine had recently died of the chronic illnesses he suffered from. Without his advice President Harrison continued his bellicose rhetoric against Chile. On 11 December 1891 the Chilean response to Harrison arrived. By the afternoon President Harrison was asking Congress for a declaration of war against Chile. On 18 December 1891 The US Congress vote was 292 to 21 in the house and 39 to 35 in the Senate as a Joint Resolution.

The US military was unprepared for a a war with Chile. Construction of new ships and transports began while volunteers were being trained. By mid-April 1892 a force was ready to be deployed. 12 August 1892 saw the city of Iquique occupied by over 5,000 American troops.

During the months after the Declaration of War, Chile began to move its own forces to the northern portion of the country to counter any American invasion. While spread out over a large area, 40,000 Chilean troops were available, many of them battle-hardened during the civil war. While the Americans had better equipment they had long supply lines and were outnumbered by a foe who was fighting for their homes.

The US Navy was able to dominate the local waters. Only small naval encounters played out with the Chilean Navy resorting more to commerce raids on American commercial vessels. The blockade of Iquique and other northern ports was secure.

However, on 21 September 1892 a large-scale operation against the occupied territories was successful. Over 1,000 US soldiers died, most of the others were wounded and/or captured. It was a major disaster with only 413 escaping by sea. While America held the sea now Chile held 2,600 prisoners of war. More troops and ship were being produced in the United States and a larger, more powerful relief force would soon be ready.

The disaster in Chile spelled defeat for Harrison at the ballot box in November. Grover Cleveland won the election and had to plan how he would handle the war.

In late January 1893 the first 10,000 soldiers of a 100,000 force arrived in Peru as a staging area. The number increased to 25,000 by March 1893. Disputes between the US Army and US Navy as well as supplying the troops were problems. A planned two-pronged attack on Iquique and Coyhaique province were planned. Future arrives would reinforce which ever front needed it.

President Cleveland took office on 4 March 1893 just a week before the planned offensive. The President put the offensive on the back burner and opened diplomatic channels with Chile. He felt that enough people had suffered and died over a bar fight. The public backlash was high against Cleveland with unrelenting assaults by the press on a daily basis. The blockade of Chile was kept in place during negotiations. By June he submitted a treaty to the Senate. The treaty would see to the release of all prisoners, including the arrested crew members of the Baltimore, and the US would pay $200,000 in gold for damages to Iquique and from the blockade. The treaty only received 33 of the 59 votes it needed. They country was at war with a Commander-in-Chief who didn't want the war and a Senate that didn't want to end it.

Disease struck the military camps in Peru during August so any military operations would have to be delayed. During the three worst months of the outbreak over 3,800 Americans died. This delay did allow President Cleveland to try to acquire Easter Island from Chile in order to sweeten the deal for the Senate. By having the reparations be considered a purchase it might have a chance of passing.

November 1893 public pressure in the United States was forcing Congress' hand regarding the war. Despite the Democratic majority in the House a call was made to begin impeachment proceedings against the President for failing to carry out his duties as Commander-in-Chief, that failure leading to the loss of thousands of men to malaria and other tropical diseases as thousands of others suffered in prison camps.

On 15 December 1893 the President finally broke under the pressure. He resigned his office and Adlai Stevenson I was sworn in as the new President. Stevenson quickly organized a new campaign on Chile. Heavy fighting over the next four months on three fronts forced Chile to surrender on 14 May 1894. Five thousand additional Americans died, over 10,000 Chilean troops and thousands of civilians due to indirect fire, lack of supplies, and disease. 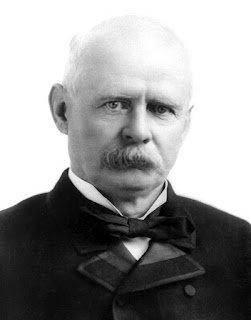 The United States seized Easter Island and claimed $250,000 in reparations from Chile. Most of the money would never be paid as on June 3, 1884 Peru and Bolivia both declared war on Chile.

Grover Cleveland is actually one of my favorite presidents so I hope I didn't make him seem too much of a wuss in this alternate history. Perhaps he would have had no problem continuing a silly war since Britain did have some influence in Chile at the time... not sure if they had as much after the Chilean Civil War of 1891. 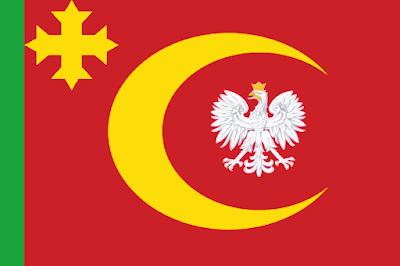 In 1937 the Duchy of Djibouti was on of two colonies of the Królestwo Zachodnim Afganistanie that gained independence. The KZA's naval power was almost non-existent and the regular military conflicts with China and rebel hunting in the Russian Empire took nearly all of the nation's focus. It was felt that releasing the colonies from the Kingdom would allow them to better develop on their own.

The odd mix of politics and religion from the Królestwo Zachodnim Afganistanie carried over to the Duchy of Djibouti. Duke Cumar Grabowski took over as head from his father, Duke Stanislaw Grabowski. Prime Minister Xasan Aref Geelle controlled many day-to-day operations as the new country made a step towards becoming a constitutional monarchy. During the original colony's founding a large portion of southern Ethiopia was conquered and added to the Duchy.

A war between Djibouti and Ethiopia form 1940 to 1942 helped solidify the new nation and in the end brought Djibouti and Ethiopia on a road to lasting peace. As part of the terms of the Djibouti victory in the conflict, Prince Ismaaciil Grabowski would marry Princess Tsehai Haile Selasasie of Ethiopia. She was the youngest daughter of the Ethiopian emperor.

With increasing tensions and threat of war with the Empire of Japan, the United States was determined to keep its money out of enemy hands if its territories were invaded. This idea eventually evolved into the 'Blue Back,' a territorial currency for use during the time of crisis. The first notes were issued in fall of 1941 and would be in circulation until 1948 (other than the Kamchatka-Chukotka & Philippines notes which were withdrawn after the 1942 invasion).

Each note had a letter designation for the territory it originated. If one of these territories fell to enemy forces the related money would automatically become contraband and have no value.

Over $580 million of territorial notes were printed. Various denominations and designations made up this total, mostly for Hawaii.

By the 1980s surviving 'Blue Backs' were worth quite a bit to collectors, especially the 'C' series.

THE STORY
Once you get past the whole Confederate victory in the Civil War the story isn't bad.

Set a couple of decades after the Confederate States of America won their independence. The book starts out as a military fiction the crew of the airship Appomattox have a number of adventures. This leads them to becoming part of a military intelligence unit.

The USA agrees not to intervene in a war the German Empire starts with Spain to gain territory in the Caribbean. The CSA gives support to the Spanish Empire including military aid. The CSS Appomattox is a Confederate airship, under the command of Thomas Devareaux, is patrolling the Atlantic searching for German naval groups.

The Appomattox bloodies a Germany battle group, destroying some enemy airships that were flying cover. As the Confederate ship is being repaired much of the crew is drafted into intelligence operation in the Caribbean including infiltrating the jungle on occupied islands taken by the Germans. Devareux's personal life and traitors withing the Confederacy get drawn together in the backdrop of the war.

There is good pacing and a variety of action. The story itself is self-contained but has a number of loose ends and seems ready for a sequel.

THE CHARACTERS
Thomas Devareaux is of the standard heroic mold. He does have a romantic backstory with the daughter of a higher ranking officer. The bumps in that long-distance relationship add some chaos to Devereaux's life and have a further connection to the story. Most of the other crew members of the Appomattox are likable enough despite being Confederates.

FINAL THOUGHTS
Some of the technological innovations developed by the Confederates seemed a bit far-fetched, while airships are cool and all the CSS Appomattox seemed pretty advanced for the time. Technology-wise the CSA seemed to be keeping up with the USA. Given the difference in population and industry between the two nations the CSA would eventually fall behind relying on stealing technology from their northern neighbor. Then again the old Soviet Union was able to project a pretty good illusion about their technology and capabilities back in the day.

The battles with the German airships were entertaining. The portions of the story set in the jungles of occupied territories were interesting as well.

Overall the book was fun. I enjoyed the story and look forward to future chapters in series.