Map of the United States of America circa 1910 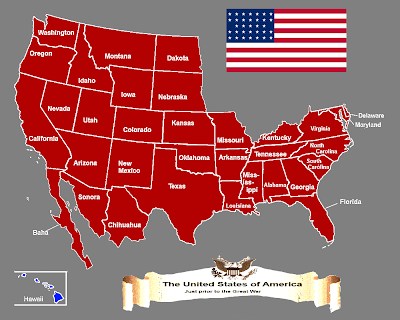 Last January I was planning my own twist on the alternate American Civil War. Over the summer and fall of 2014 life happened so I didn't develop it as much as I wished. This map is a spoiler for that timeline - the rebellious northern states, due to their population and industry managed to break free of the United States to for the Federation of Free America.

After the north-eastern states broke away the United States quickly got involved in another war with Mexico. The French decided not to intervene which allowed America to annex new territory. The much weaker United States was seeing itself becoming more isolated with the French and British befriending the FFA. After Germany purchased Cuba from Spain on the 7th of June 1889 the United States worked to improve their relationship with the new German Empire.

Naval agreements between the FFA and British Empire became an increasing worry for the United States. They entered into a formal alliance with Germany in 1911, giving Germany access to additional ports in the Caribbean and Pacific as well as the growing American markets. In return Germany military advisers helped the USA modernize its military and gave financial assistance.

With the coming of the Great War the United States would join the Central Powers as the FFA would soon after join the Allies.

With the world war spreading to North America, the map would end up changing again...