Birth of the Hungarian Soviet

When Russia was knocked out of the Great War in 1917 Romania was finding itself in an increasingly difficult position.

In early 1918, Still desiring a 'Greater Romania' it was decided to continue the war against the Central Powers. On 4 March German, Bulgarian, and Austro-Hungarian troops quickly initiated assaults into Moldava. Despite the poor quality of the remaining troops of the Central Powers and the good showing of the Romanians in 1917 the new campaigns went poorly for Romania. Without Russian support and quickly dropping morale Romania was doomed in new campaign.

On 18 April 1918 the central authority in Romania collapsed and the Russians took the opportunity to move into Bessarabia. The Romanian troops in that area fled, some to their occupied homeland while others joined the Russians.

Not long after, the Central Powers were defeated. The Austro-Hungarian Empire then collapsed. on 21 March 1919 Communists seized power in Hungary under Béla Kun. The Hungarian Red Army moved to crush opposition and then turned its eyes towards the crippled Romanian territories. 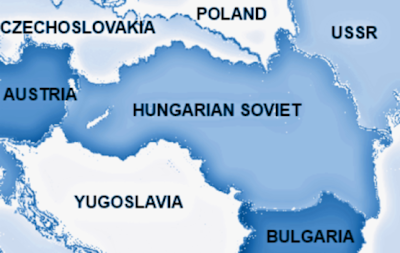 With Russian help, and little real opposition from Allied forces, the Hungarians maintained their claim on the conquered lands. The Hungarian Soviet was founded. It would spend years trying to consolidate its territory and putting down counter-revolutions. Lenin, seeing the value in aiding their Hungarian comrades supplied additional troops and what weapons he could to Kur.

NOTES/REFERENCES
1) The Romanian Battlefront in World War I by Glenn E. Torrey
2) Supreme Soviet of the Soviet Union
3) Béla Kun