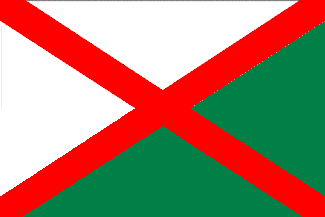 
In 1918 Alexander Vasilyevich Kolchak became leader of the Provisional Siberian Government. He worked with the British and Americans during the Red War but his personality alienated many of his real and potential allies. This would cause him great trouble as the war progressed.

This flag was his personal standard during the conflict. It would fly under the Russian flag at his headquarters and in the field.
Posted by Sean at 06:00 No comments:

The Red War - Part One: Origins

THE RED WAR PART ONE: ORIGINS


The disaster known today as The Red War had its origins in another conflict. That other conflict being the Russo-German War (1914 to 1917).

The Assassination
The catalyst for the start of the Russo-German War was the assassination of Archduke Francis Ferdinand, Inspector-General of the Austro-Hungarian Army and Heir to the Throne of the Empire. Ferdinand died in Sarajevo after being shot by a Serb national on 28 June 1914.

Calm Before the Storm
On the 5th of July the German Empire issued Austria-Hungary a "blank check" in dealing with Serbia. Austria-Hungary issued a harsh ultimatum to Serbia on the 23rd of July that was designed to be refused by the Serbs. That refusal came days later and it looked as if all of Europe could possibly be dragged into war.

28 July 1914 Austria-Hungary declares war on Serbia. Two days later Austria-Hungary mobilized its military. on the 31st Russia did the same. The Russian mobilization led to a flurry of diplomatic activity between Germany and France. Germany convinced France to stay neutral in the conflict since their agreement with the Russians was to come to Russia's aid if it was attacked first - but their mobilization against Austria-Hungary could be categorized as an offensive action releasing France of its obligations.

4 August 1914 the German Empire declares war on Russia to defend their Austrian allies.

The War The Germans made quick gains into Russia in the first few months of the war. Their planned advance up the Baltic coast was delayed by the unexpectedly fast and powerful Russian attack on Austria-Hungary. The poor organization of the Austrian forces led to them being pushed back by the Russians and fighting a terrible winter war across the Carpathians from November 1914 to spring 1915. German plans were placed on hold so they could support their allies.

Serbia managed to hold out against the Austrian forces for over a year. They finally collapsed in October 1915 when Bulgaria joined the war on the side of Germany and aided in the conquest. This should have freed up a large force of Austrian troops to be used against Russia, but the terribly administrative skills of the Austrians made it clear that they would be lucky to be available for the Russian front by the spring of 1916.

Chief of the German General Staff von Moltke did not want to send a large force to decimate the Russian Carpathian armies and save Austria. "Saint Petersburg is to the north, bumbling fools to the south. We march North and to victory!" The summer of 1915 saw the German Baltic campaign against Russia.

The Baltic Campaign
At first German advances up along the Baltic coast met little resistance. Reports of major fortifications being constructed around Saint Petersburg including multiple rings of trenches were received. However without confirmation von Moltke was cautious.

Battle of Tannenberg
September 1915 the bulk of the German invasion force was entering Estonia when Russian General Alexander Samsonov struck. The bulk of Russian forces were not protecting St. Petersburg, but were in the Ukraine. When German supply lines were stretched Samsonov launched his attack through the weak German defensive screen and into Germany itself at the Tannenberg forest.

The Germany Navy controlled the Baltic and could get basic supplies to the German invasion force, but the supplies coming by land were needed for any serious offensive towards the Russian capital. Instead von Moltke sent half of his army back towards home in hopes of trapping the Russian army. The rest of the German invasion force would remain in the Baltic and consolidate its gains.

Back in Germany General Samsonov made some impressive gains and inflicted heavy casualties on the Germans. However in mid-October he came across the newly constructed German trenches and was stopped. Samsonov did not dig in himself knowing that a German army was approaching his rear; instead he fled south to used his forces against the Austrians, and hopefully commit the Germans to sending more forces south themselves.

Erich von Falkenhayn
After the setback at Tannenberg, von Moltke began having major health problems. In November 1915 he was replaced by Erich von Falkenhayn. Over the winter Falkenhayn worked closely with his Austrian counterparts and helped to bring both Romania and the Ottoman Empire into the war in the spring.

In 1916 with the new front opened against Russia by the Ottoman Empire and Falkenhayn's decision to bail out Austria first before making the final push against Russia. Germany and her allies made great gains in the south but a number of things began to concern Falkenhayn. The Russians seemed to willing to trade land for time. There were also rumors about the capital being moved to Moscow, a much more difficult target.

The harsh Russian winters, the seemingly unlimited troops, and the drain on the German economy by the war were adding pressure to finish it quickly..... but the Russians were playing to drag it out as long as possible. It would would take a number of years before the Kaiser could dictate terms to his foe.

Enter, Lenin
The only way Germany could get a quick victory would be for the Russian people to rebel against their Tsar. It would not be possible unless some new element was added to Russia. That element was Vladimir Ilyich Lenin. The political chaos Lenin could unleash on Russia could help end the war in Germany's favor.

In October 1916 Lenin was smuggled into Russia. His revolutionary activities as well as a major German offensive in the spring of 1917 caused a collapse of the Tsar's government by June 1917. Not long after that would be the Russian Revolution and the beginning of The Red War.
Posted by Sean at 19:29 No comments: 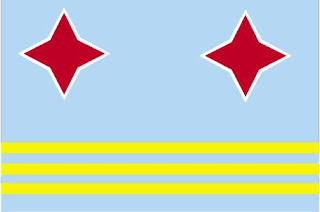 A neighboring city-state of Strumicvar on the north-eastern coast of Novo Skopje (on the coast of Brazil on our world). The two cities don't have the most peaceful of relations but still manage regular trade in the post-apocalyptic world that they inhabit.

NOTES
This was a quickly made flag back when I was running a GURPS Infinite Worlds game. Strumvicar's flag was a new design but I based this one off the real world flag of Aruba.
Posted by Sean at 06:00 No comments: 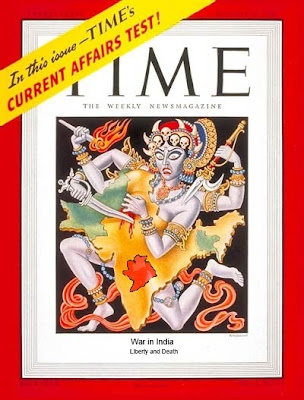 
The State of Hyderabad was the largest and most prosperous of the princely states in India. Covering over 200,000 square kilometers and containing over 16 million people. Osman Ali Khan, Asaf Jah VII decided to keep the territory independent of India and Pakistan when the British left the local rulers of such states the choice of joining the new dominions of India or Pakistan, or of remaining independent.

On the 24th of August 1948 Hyderabad requested that the Secretary General of the United Nations have its Security Council consider the grave dispute it was having with India. Under Article 32 of the United Nations Charter. On the 4th of September Mir Laiq Ali, the Prime Minister of the Hyderabad State, announced to that nation's assembly that a delegation headed by Moin Nawaz Jung was being sent to United States.

Additional attempts to gain support for independence were made to the Labour Government of the United Kingdom as well as to the King. Hyderabad wanting garauntees of the British promises of independence. The attempts were unsuccessful despite some vocal support from Winston Churchill. These multiple attempts to secure their independence have angered the Indian government which is worried that Hyderabad will eventually join with Pakistan. Military preparations in Hyderabad caused similar preparations in India.

With ever increasing tensions it was known that war would soon arrive. In the pre-dawn hours of the 13th of September the Indian Army invaded Hyderabad. Troops were reported crossing into Hyderabad from every direction. The first battle was fought at Fort Naldurg on the Solapur Secundarabad Highway. The First Hyderabad Infantry and the attacking force of the 7th Brigade battling the 2nd Sikh Infantry.

Within a few days of the invasion the situation escalated. After a failed attempt by a Hyderabadi Razakars (an irregular, private militia with Moslem tendencies) to destroy one of the invading Indian armies the some survivors of the Razakars melted into the countryside and began terrorizing Hindu civilians. After 200 civilians were massacred in a local village an outraged Indian government escalated its military involvement.

On September 17th Pakistani militia fighters were intercepted trying to smuggle themselves and additional weapons into Hyderabad by Indian forces. A skirmish developed that has drawn official condemnation from Pakistani authorities. Additional Indian troops have now begun reinforcing the borders with West and East Pakistan dramatically increasing tensions.

The bloodshed was increased later that by a tragic accident when a Spitfire of the Royal Indian Air Force attacking Hyderabad positions was disabled and crashed in a densely populated area of city of Aurangabad killing over a hundred and injuring hundreds of others in the resulting destruction and fires.

On September 18th the Hyderabad State Congress was dissolved and the Ittihad-ul-Muslimeen party has established a new legislature. Support of the inhabitants for their government is collapsing as the mostly Hinu population wishes to join with India. Despite the superior Indian military forces and their occupation of the region the Nizam of Hyderabad escaped his palace and has declared his lands part of Pakistan. Given the situation the government of Pakistan has not acknowledge this declaration, but it has drawn additional volunteers into the region to fight for the Nizam from Pakistan.

Aurangabad fell to Indian forces on the 19th. At that point a majority of the the Hyderabad military surrendered.

Sporadic guerrilla warfare continues in Hyderabad and the increasing violence along the border with Pakistan threaten to throw the entire sub-continent into civil war.

A meeting in Geneva next week will hopefully be able to resolve this developing situation without any further bloodshed. A representative of Osman Ali Khan, Asaf Jah VII will be in attendance to negotiate terms. Continuing coverage of the conflict and results of the conference will be in our next issue.

NOTES
The image for this post is a modified version of the 27 October 1947 Time Magazine cover. The original illustration was created by Boris Artzybasheff. According to Wikipedia the cover is in the public domain. I modified the original to fit this alternate timeline.

Info on the Royal Indian Air Force during this period.

Reginald Mitchell is a fictional reporter for Time in 1947. He is from the UK and spent a portion of his life in Colonial India.
Even in this timeline Hyderabad is destined to become part of an Indian union. Too many of the population will want to be Indian. It will have been a bloodier fight, would that blood have made the future Indo-Pakistani wars more severe? Could a small group of routed irregulars have killed 200 innocent people in an isolated village to start the escalation?
Posted by Sean at 22:16 No comments: