BACKGROUND
During Maius 2595 AUC the land of Kazakhia, a Chinese vassal at the time, fell into rebellion. The native Kazaks were unhappy with Chinese domination and desired more freedom. Violence steadily escalated during the month until 26 Maius when Chinese advisors opened fire on a large protest in the Kazakhian capital.

Open rebellion resulted from the violence. Kazakhia had long ties with China as well as regular contact with Rome. As a vassal of China driving deep into central Asia Roman governments considered it a potential threat. By late Iunius 2595 AUC the Fourth Roman Republic recognized Kazakhian independence and began mobilizing legions to be sent to support them. The Kazakhian War was the result of this escalation. The two powers had been living in relative peace with each other for decades, only minor border skirmishes on occasion. Now they were at war.

Despite two global powers with long common borders being at war the conflict itself remained mostly confined to Kazakhia itself. Neither side wanted to escalate to a broader, global war. A few naval skirmishes across the world’s oceans were the only exception. 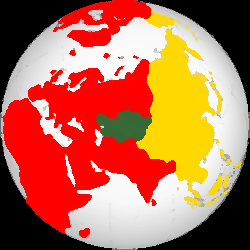 TECHNOLOGY
When the war started firearms had been in service of both sides for some time including revolvers and bolt action rifles. However new developments at the beginning and during the conflict brought more deadly weapons to the field. This was the first large scale industrial war.

Machine guns were of major importance. In a fortified position they could keep large enemy forces at bay. Mortars, poison gas, and aeroplanes were other innovations taking the field of battle for the first time.

CHALLENGES
One of the main challenges in the war was keeping the large armies supplied. Rome had more developed railroads in the region so had an advantage in this regard. China had a more difficult time getting supplies and munitions to its troops.

Kazakhia was 25,661,000 concentrated mostly in the southern portions of the 3,500,000 square kilometer nation. The armies and support forces from both major powers during the four years of the war added, on average, 6.5 million additional people, at any one time, to the region. This stressed the local infrastructure.

At times troops would spend more time building roads, trenches, and extending rail lines than they did in combat zones. The costs of supplying these forces and paying for the construction projects were a major drain on the budgets of the Fourth Roman Republic and Chinese Empire.

FIGHTING
Most combat took place around major population centers or strategic terrain. Large armies had difficulty crossing the unfortified steppe of central Kazakhia. The semi-arid conditions of the steppe made it impossible to easily supply large marching armies with water.

In the first six-months of the war Rome quickly captured a number of border cities, including Oral-Chogan, Tobolnay, Samarkand, and Karakalpak.

In 2596 AUC reinforcements by the Chinese lead to the sieges and major bloodlettings of Simkent, Ak-Mechet, Semey, and Pavlodar. Semey was still in Chinese hands at the end of 2596.

The last years of the war were a bloody grinding as Rome again pushed from settlement to settlement forcing Chinese forces back to their border. The high costs in both blood and treasury caused the Chinese to finally withdraw.

AFTERMATH
15 Aprilis 2599 AUC saw an end to the conflict as the Chinese government was on the verge of collapsing. Kazakhia would host Roman legions who were there supposedly to ensure the peace and to guarantee repayments of debts owed to Rome. On 1 Augustus 2601 AUC Kazakhia was made a Roman province. Isolated rebel groups would be contained and eliminated over the next 40 years.

The economic and social consequences of the war shattered the Chinese Empire. Eventually five major independent regions would evolve. It would take nearly a century and a half for the various regions to reunite.

The global depression that started in 2604 AUC can be traced back to the war. The spending and distortion of markets by military production led to a drop in industrial production. The returning soldiers reentering the workforce needed jobs and many needed specialized medical care for wounds. Such infrastructure did not exist at the time. The disintegration of central Chinese authority also caused major disruptions to international trade and crippled numerous supply chains, adding to the forces driving the depression.

The Republic’s economy would be stagnant for over a decade. Interestingly some of the now independent regions of China actually had vast economic growth during the same time period.