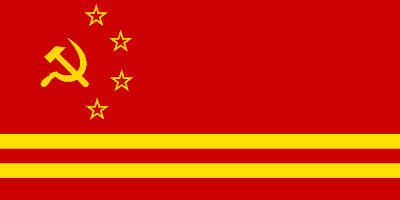 In 1951, months after the Peoples' Republic of China entered the Korean War, United Nations forces were escalating their attacks to drive out the new invader. The Soviet Union became increasingly alarmed with the combat taking place near its border. When an American atomic bomb was dropped on Chinese troop concentrations in China the Soviet Union withdrew from the United Nations taking the other communist bloc nations with it.

An informal military alliance was forged between the Soviets and Chinese. Russian military forces were shifted to the east and entered the Korean War. Panic of the war spreading to Europe, which still was in ruins from the Second World War, caused mass migrations and a majority of people to move out of West Berlin to more secure areas of West Germany.

IN 1952 The Sino-Soviet Alliance, which includes the Warsaw Pact nations is forged. A new flag for the alliance is revealed. The first public use of the new flag is to fly it over the former West Berlin as it is annexed by the East in July.

The war continues for several more years in Korea with a catastrophic loss of life.