Review - We Could Do Worse

Life's gotten a bit busy! It's been over a week since my last update. Sorry about that. Here's a brief book review until I can finish a couple of meatier posts I'm working on: 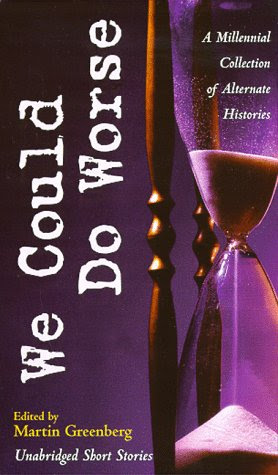 (image from Amazon.com)
Here is a collection of alternate histories that includes some big names. Brief descriptions follow... very brief since I wanted to avoid spoilers.

1) A Massachusetts Yankee in King Arthur's Court: by Harry Turtledove. JFK is sent back through time and space to Camelot. He meets and has a fling with Queen Guinevere. No real point to the story. Just makes JFK and the Queen look like jerks. Just involves time travel - not really alternate history.

2) Ike and the Mike: by Howard Waldrop. Instead of becoming generals Eisenhower and Patton are jazz musicians! Good story; not very believable but its not bad.

3) Looking for the Fountain: by Robert Silverberg. The story of one of the survivors of Ponce de León's expedition to search for the Fountain of Youth. A really good story about a lost civilization they discovered instead. Great idea - but there is no follow up, no indication of how history was altered.

4) The Return of William Proxmire: by Larry Niven. An interesting story of what happens to a man who travels back in time to change history and the consequences he suffers. Not one of those ironic Twilight Zone consequences, but a interesting take on what might happen to a time traveler.

5) The Arrival of Truth: by Kristine Kathryn Rusch. The best of the collection of this book. Tells a story from the point of view of a slave in the American south when a slave uprising begins. The most interesting characters in the entire anthology.

6) Goddard's People: by Allen Steele. In a world where America and the Third Reich are in a race involving rocketry. The Nazis want to create an ICBM and the US wants to create something to shoot it down. Interesting, but I'm not sure things would have turned out differently.

7) Over There: by Mike Resnick. I've read this one in other anthologies. Teddy Roosevelt assembles his Rough Riders to fight in the Great War. The old and new worlds collide in this fine story.

8) Bloodstained Ground: by Brian Thomsen. Failed novelist Sam Clemens vs. the legacy of newly deceased President George Armstrong Custer. One of the better stories in this anthology. Even if he failed as a novelist, Clemens would have excelled in whatever else he chose to do.

9) We Could Do Worse: by Gregory Benford. A short piece set in a world where McCarthy became president of the US.

Over all I'd give this book 3 stars. Maybe the low end of 3. While most anthologies end up netting out to about a 3 I had higher hopes for this one. Oh well, better luck next time.
Posted by Sean at 22:01