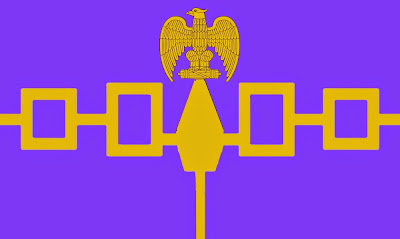 After a global war between the Fourth Roman Republic and Zhōngguó in 2766 AUC the world was in chaos. Billions died and civilization collapsed. One of the few cities not to be hit during the war was Genesee, a medium-sized city in Irokois Province of the Republic. A change in the jet stream and influence from the Great Lakes kept much of the fallout from the obliteration of nearby cities form killing everyone in Genesee.

After a harsh winter and no contact with Rome or any other authority, the military leaders in Genesee took control and formed the Kingdom of Irondequoit in the spring of 2767 AUC. Having some of the last tanks and military vehicles left functioning on the continent scouts were sent to the shattered remains of nearby provinces, mostly to the south and west, looking for survivors and territories to add to the new Kingdom.

Otetiani Lutatius Validus, the legatus legionis of the Genesee Legion, proclaimed himself dictator of this new nation. He introduced the new flag for his forces to serve under to build loyalty to him and to get them to forget about their former oaths to the old Republic.

The main goal of the Kingdom are to find arable land. The anticipated plagues, famine, and nuclear winters of the next few years are the main hurdle for the survival of the state. The limited supply of hi-tech parts and ammunition will be the the other challenge.
Posted by Sean at 06:00