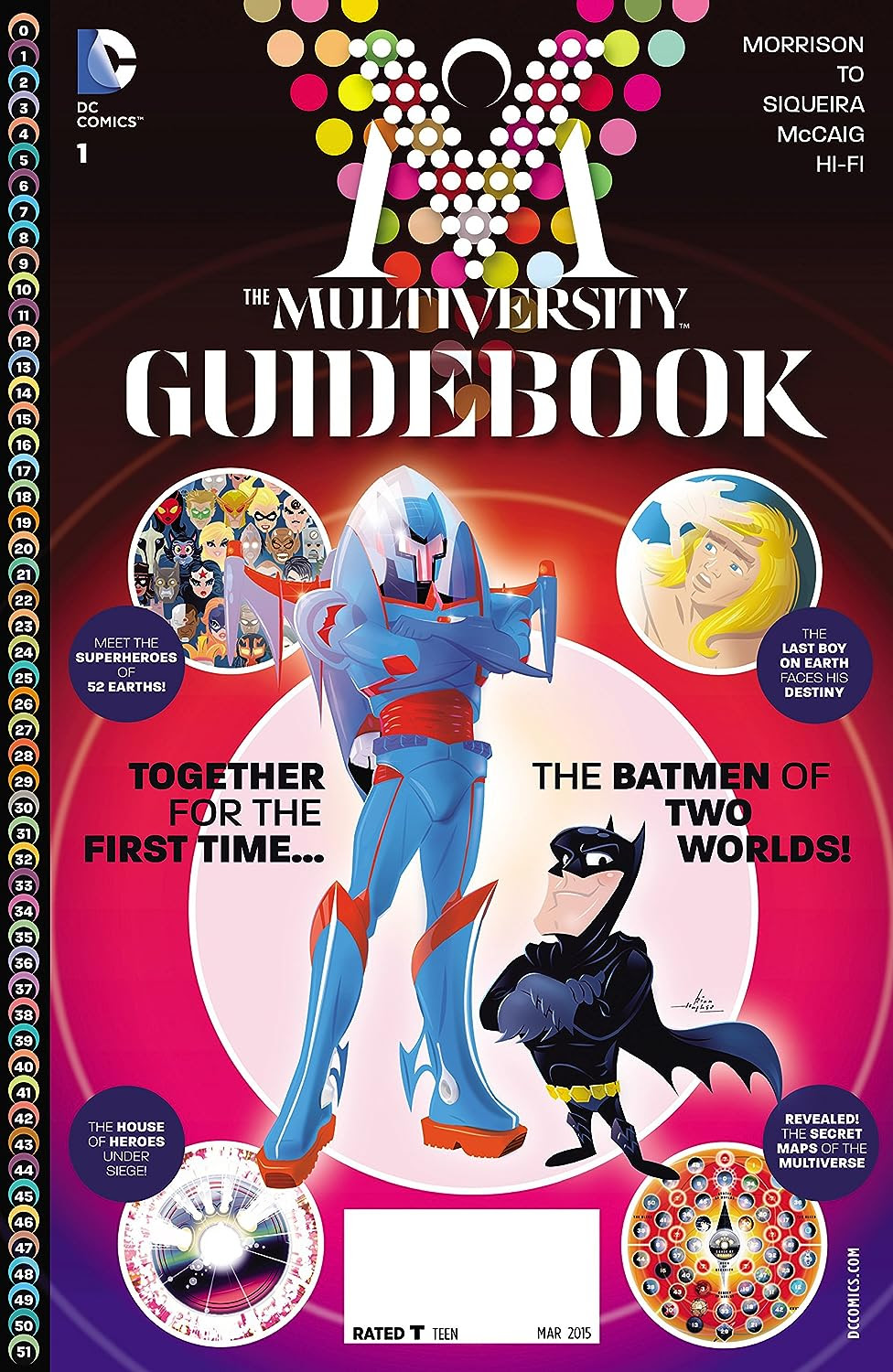 This review won't be of a regular alternate history book. Its for a comic book with details on a multitude of alternate Earths for the mainline DC Universe.

I haven't bought many comic books in the last decade. I sold off most of my collection a few years ago (for a tiny fraction of what I had paid for them) keeping the few that had stories I liked. New comics are too expensive and different titles are too connected story-wise requiring an even larger investments. The constant epic events and crossovers didn't help.

However yesterday I did rush out to the comic shop during lunch to buy a copy of The Multiversity Guidebook by DC Comics. I may not collect comics anymore, but I do like playing superhero role-playing games and I saw this book as a great set of ideas for expanding my RPG campaign.

WHAT'S IN IT?
The book contains part of the Multiversity storyline. It brings heroes and villains from various universes in the DC Multiverse together as part of a larger plot. The selling point for me were the map of the Map of the Multiverse and brief descriptions of 45 of the 52 alternate Earths that make up the DC Multiverse. While I would have liked more details on the various alternate Earths there was enough info for my gaming purposes.

The story portion of the book is broken into a couple parts - one has two very different Batmen teaming up to escape an army of robots created by alliance of a couple dozen Sivanas. Meanwhile, on an alternate Earth, Kamandi and his allies investigate a tomb on 'the Island of the God Watchers.' By the end of these short pieces the Batman from Earth-17 finds himself in the Hall of Heroes just as it is attacked by forces of the BIG BAD GUY.

MY THOUGHTS
The alternate Earths have only one or two short paragraph descriptions. Not too much information on divergence points, etc. But given the super-hero spin most of them are interesting in their own ways. If I start up a superhero RPG campaign in the near future I might try setting up campaigns on either Earth-17, Earth-20, or Earth-31.

Earth 17 diverged with a global nuclear war in 1963. It is now over 50 years later and the world's heroes are fighting to rebuild their planet and keep mutants at bay (and fight off Darkseid).

Earth 20 is a pulp-style world with Doc Fate and the Society of Super-Heroes. Given my love of old pulp stories this one would be a fun campaign setting, and the war it is having with Earth-40 creates many more opportunities for adventure.

Earth 31 suffered some terrible disaster in its past. The global sea levels have increased (I'm picking about 100 meters for my maps), and also suffered tsunamis and earthquakes which further changed the surface. Swashbuckling adventures and piracy appear to be the key here, and the image including a steampunk-looking Cyborg opens up other gaming possibilities.

I just hope this guidebook and the effort they've put into this whole Multiversity thing means that DC is finally going to stop messing with the history and structure of their multiverse for at least for a decade or two. All in all I'm happy with the guidebook. While I wanted more what was in it was good. 4 out 5 stars.