Here is the first alternate history post for his blog. I've chosen the timeline format because it is one of my favorite. The divergence point is mid-1915 and I've roughly mapped out history until 2013. Let's see what happens.

1915: Baron Leopold von Berchtold and Count Istvan Burian von Rajecz are traveling to an important meeting in Vienna by automobile. Their is a terrible accident. The driver and Baron Berchtold are killed while Count Rajecz is seriously wounded. Count Ottokar Czernin is recalled from his duties in Romania and made the new Foreign Minister of the Dual Monarchy.

Later in the year Italy wants Austro-Hungarian territory containing Italians ceded to it in exchange for remaining neutral in the Great War. Germany pressures the Austrians to give in to the Italians. Count Czernin realizes that the millions of troops that would be needed to defend against the Italians would be better used against the Russians. He advices the Emperor to agree to the terms. It is a difficult sell but the potential gains in the Balkans and against Russia win out over border territory. 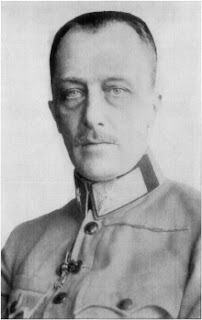 Ottokar Czernin (image taken from Wikipedia and credited from a book on Gutenberg.org Before the War, by Viscount Richard Burton Haldane; in public domain due to age)

1916: Germany coordinates with Austria-Hungary on attacks against Russia. The show of force by the Central Powers as well as further actions by Count Czernin keep Romania out of the war.

1917: Vladimir Lenin spreads communism in Russia. Revolution strikes the country and it drops out of the war.

The Zimmermann Telegram brings the United States into the war on the Allied side.

Italy joins the Central Powers and invades France with over two-million men. They hope to gain Corsica, Tunisia, and any other land they can seize from the French. The offensive is stopped by the French, but their lines become incredibly weak.

1918: The weakness of the French position forces American troops to be put into French units as soon as they arrive. General Pershing was opposed to this, but the reality of the war forces American men into French commands. Despite the influx of troops the additional fighting on the Italian front makes the French too weak. By October the Germans get their breakthrough and threaten Paris.

The British Expeditionary Force is cut-off during this breakthrough and is forced to evacuate the continent at Dunkirk knocking them out of the land war. France surrenders shortly afterwards.

1919: The peace negotiations continue for the better part of this year. The United States gains nothing from the war except tens of thousands of its young men killed and many more wounded. America becomes much more non-interventionist as a result. President Wilson becomes one of the most unpopular Presidents ever.

1920s: Despite being on the winning side of the war the Ottoman Empire still collapses. The Arab revolt and continued uprisings of other ethnic groups shatters the Empire. The Italians, Greeks, and British gain control of parts of the Middle East from the Turks.

1930s: Spanish Civil War - Franco wins the conflict with the aid of the Germans and Austrians. The Republican forces were supported by the Soviet Union and France.

The Dual Monarch becomes the Triple Monarchy as the people of the Balkans are given more autonomy.

China is in chaos as communist revolution and Japanese invasion begin. Stalin, facing a strong and economically unified Europe give substantial military support to Mao. Japan captures much of eastern China.

1940s: War continues in China. The United States takes a light-handed approach with Japan so long as the Japanese battle communist forces. Combined Russian-Red China forces push Japan almost completely off the mainland. Only southern Korea, Formosa, and several major coastal cities in China remain under Japanese control. When the Nationalist Chinese are finally defeated the communists agree to an end of the conflict with Japan. Japan retains control over the few territories it controls and the communists have time they desperately need to rebuild.

1950s:North Korean forces, supported by China and the Soviet Union, invades Japanese controlled South Korea. Japan is pushed back in the early months until they are able to deploy enough reinforcements. Among the reinforcements are units from United Kingdom and Australia and several thousand American volunteers. Years for fighting and countless thousands of deaths lead to a stalemate and eventual ceasefire agreement. The Imperial government in Japan collapses and more political freedom is given to the Japanese.

Rebellions throughout German Indochina cause much death and destruction. Viet Nam, Laos, and Cambodia gain independence as Germany finally withdraws. To cover their withdrawal the Germans detonate the first atomic bomb on Hanoi.

1960s: Many regions of Africa go into rebellion against European imperialists. Some of the worst fighting takes place in the Congo. American corporate interests want access to resources in the Congo so convince the US Government to intervene. This is the largest scale overseas military operation by the United States since the Great War. It turns into a quagmire lasting five years and costing tens of thousands of American lives and many hundreds of thousands of natives.

The poor treatment of blacks in America combined with this unpopular war in Africa leds to the Civil Rights movement in the US. At times violent it never sparks an outright civil war. Laws are eventually passed to finish what was started a century before.

1970s: The Confederation of European States forms. Germany dominates the new Confederation that makes up most of the nations of Europe except for the UK, Soviet Union, and Switzerland.

The Soviet Union continues its decline. It controls a vast international empire but a terrible economy and ethnic strife keep it lagging behind. 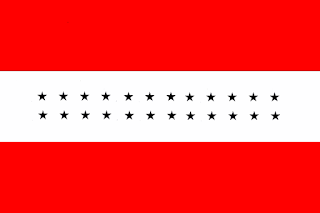 Flag of the Confederation of European States in 2013

1975: China breaks away from the Soviet Union. It and Japan both possess nuclear weapons (the Confederation, USA, and UK being the other three nuclear powers).

2000s: North Korea nearly brings China and Japan to war. Several hundred on each side are killed in skirmishes. Timely American political and economic intervention help to defuse the situation.

Tensions between India and Pakistan increase as India tests its first atomic bomb.

Struggles between German backed Turks and British backed Arabs & Egyptians lead to wars in the Middle East. Direct European interventions into the conflicts back-fire and turn most of the different factions against them. Events become worse when the Reichstag is destroyed by commercial airliners hijacked by terrorists. The Confederation of European States declares a war on terror as a result.

2013: The War on Terror continues and threatens draw in other nations such as India, Pakistan, the United States, and Japan.

The five largest economies in the world are: 1) The United States, 2) The Confederation of European States, 3) The Japanese Republic, 4) The British Commonwealth of Nations, 5) Peoples Republic of China

It is now a time of growing chaos. The global economy is is a slump, countless small wars threaten to become large wars, and the world continues on into the future.
Posted by Sean at 13:04