DURING WORLD WAR I

On 7 May 1915 German submarine U-20 fires a single torpedo into the Titanic. Two crewmembers who were near the impact area were killed but the ship remained afloat and made it to safety. This incident further damaged ties between the United States and Germany. In later yeasr it was learned that the Titanic was transporting war munitions in violation of the rules of war.

In spring 1916, after repairs were completed, the Titanic was requisitioned by the Admiralty as a troop transport. After transporting over 50,000 soldiers to the continent and many tons of supplies she was made a hospital ship in 1917.

After a post-war refit the Titanic once again returned to her original role as an ocean liner. From 1920 to 1930 she performed her duties admirally. The global economic collapse and Great Depression caused her to be decommissioned. 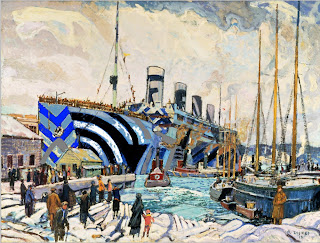 In 1939 the Titanic was purchased by the Crown and recommissioned as the HMS Titanic, reprising her role as a troop and supply ship. She spent most of the war transporting Canadian troops and supplies form North America back to England.

In 1946 the tired old ship was finally decommissioned again. In 1952 she was sold for scrap.

FOOTNOTES
The painting above is a modified version of Olympic with Returned Soldiers painted in 1919 by Arthur Lismer. I modified the dazzle painting on the Olympic to represent the Titanic in this alternate world. Obtained the original image from Wikipedia.

The premise of this alternate timeline is that there was no fire in the coal bunkers of the Titanic and it did not need to make haste through the trecherous waters in the north Atlantic. The iceberg was missed and life continued for the ship. It is probably a bit optimistic to think it would have served in both world wars, but there is no way to really know.
Posted by Sean at 12:45