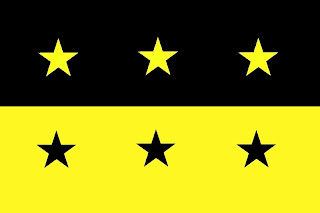 The flag of the Habsburg Hegemony for a timeline I created a number of years ago. The Habsburg Hegemony; which is made up of the Austro-Spanish Empire (most of Europe), the Mexican Empire, and a confederation of South American states. They also have colonies dominating Africa and Nieuw Holland (Australia in our world).

Other powers include China, Russia, Japan and the Ottoman Empire.

1588 = The Spanish Armada is a success.
1618 to 1648 = Thirty Years War. Habsburgs come up on top and manage to unite many of the fractured German territories.
EARLY 1800s = Increase in power of the Spanish colonies in the new world.
1840s = Industrial Revolution begins in the Mexican Empire.
1880s = Franco-Habsburg war. France is overwhelmed by Spanish and German troops. Within three years it is annexed into the growing Habsburg Hegemony.
1931 = Sino-Japanese war begins. Japanese gain much territory.
1937 = Habsburg intervention in the Sino-Japanese war begins on behalf of the Chinese. Russian forced join with the Japanese, invading China from the north.
1940 = German scientists develop the Atomic Bomb. It is used on Japanese troop concentrations in Manchuria.
1941 = Kyoto is destroyed by an atomic bomb. The Japanese surrender their gains in China and withdraw to the home islands.
1950s = European space exploration begins. First man in space. Chinese uprising against what has become European occupation.
1959 = First man on the moon.
1984 = Bloody uprisings across China against Europe. The Habsburgs withdraw, but institute a strict blockade of the region.
1987 = Moon base completed. Ion drive developed by European scientists to allow cheap & reliable transportation across the inner solar system.
1999 = First Martian habitats constructed. Chinese begin developing their own spaceships and harness the power of the atom thanks to French spies in their employ.
2007 = Asteroid mining becomes a big business. Large expansions on Lunar City and the various Martian colonies.
2010 = Chinese establish independent colony on Mars and various asteroids with the help of Russo-Japanese corporations.
DECEMBER 24, 2011 = Uprisings in the Mexican Empire and South America in an attempt to break from the Habsburgs. Very bloody, and in the end a failure.
2013 = Russia announces the existence of its own atomic arsenal, this helps to delay further expansion of Europe into space and makes the Habsburgs a little less trigger happy up in space as well.