1852: Foundation of the Second French Empire.
1856: French victory in the Crimean War. Napoleon III expands his military further after this war. He institutes training of new troops by the experienced soldiers from this conflict.
1859: French victory over Austria in the Second Italian War for Independence. France begins to modernize its army and increase its size for coming conflicts.
1861: French invade Mexico. They have a long string of victories. In order to gain the time needed to consolidate their gains they secretly being to fund the Confederate States of America and smuggle modern weapons to them.
1863: Second Mexican Empire is declared, allied with France.
August 1865: The American Civil War ends with a northern victory. America turns its sights on the French intervention in Mexico.
1867: While in a better position to resist America invading Mexico, Napoleon III decides to withdraw his forces form North America. While he believes his forces could defeat the Americans who knew the price his troops would pay fighting battle-hardened Union and ex-Confederate armies would be too high.
With the growth in strength of the Prussians the French also didn't want to deplete their military with major operations in North America. His agents in America note the speed American troops can be moved across railroads. Napoleon III orders the expansion of rail lines in France to facilitate the movement of his own troops at home.
19 July 1870: Beginning of the Franco-Prussian War.
18 August 1870: After a number of German victories or stalemates in the war the Battle of Gravelotte takes place. The enhanced French rail network, improved artillery, and additional troops give the French an overwhelming victory. The Germans suffer 25,237 killed, 35,000 wounded and have their army routed. Over twenty-thousand German troops are captured.
1871: French forces cross the frontier into Germany. Bismark begins to loose control of the various German states and chaos begins to overtake the German military command. This leads to a French victory in the Franco-Prussian War.
1921: General War in Europe begins. France and Austria unite to divide Europe. Russia, Britain, and the various German states oppose them.
1923: The Ottoman Empire joins Austria and France in the war in order to counter aggressive Russian moves towards Constantinople. Benito Mussolini is assassinated during this period.
1924: The United States joins with Britain and its allies against the French menace. Italy, seeing an opportunity to regain Italian lands held by Austria also joins the allied cause.
1926: General War ends with an Allied victory and French loss. France looses Alsace and Lorraine. France is also thrown into chaos and falls to Communist revolution, forming the Travaillis Republique Democratique.
1930: German Confederation forms.
1936: Spanish Civil War begins. Communists from France intervene.
1937: Start of the Second Sino-Japanese War.
1939: Red victory in Spanish Civil War.
1940: Spain joins the Travaillis Republique Democratique.
1941: After civil unrest across Belgium, it too joins the TRD. The Japanese Empire attacks the United States of America, bombing Pearl Harbor.
1942: The TRD annexes Alsace and Lorraine form the German Confederation. The international community doesn't see it being worth fighting over.
The Communist Party grows in Italy.
1943: American advances against Japan. Russia invades Japanese-held Korea.
1944: Japan negotiates an end to the war with Russia and America.
Communist uprisings begin in Italy.
Ethnic unrest in Russia.
1947: Increasing violence in Italy as various Communist and Socialist organizations increase in power and have increasing conflicts with the government.
1949: TRD troops enter Italy after a major riot. European powers threaten the TRD.
Giacomo Matteotti leads the Italian Communists.
Serbia expands its territory by seizing some Italian ports on the eastern shore of the Adriatic.
By the end of the year the Red War begins. 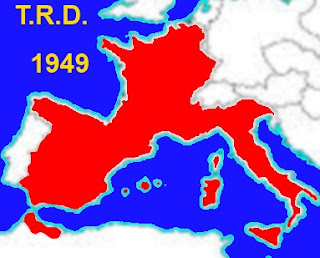 1953: After devastation of parts of central Europe and France the Red War ends. Communism has been defeated and is outlawed in Europe. The decisive factor was the use of an atomic bomb by the British on the French city of Bordeaux.
1970: Grand Alliance of Europe forms. It is a very weak international organization dedicated to ending all wars in Europe.
1976: Australia joins the United States. The American flag now has 56 stars.
2001: Muslim terrorists stage major attacks on Constantinople and Moscow. Russia declares a “War on Terror.”
2008: Russian Empire collapses under the strain of the War on Terror and the growing civil war in its borders.
2013: Sixty year anniversary of the fall of the TRD.

This timeline is a brief introduction to the world that will be the basis of my entry for the Double-Blind What If Writing Contest over at Alternate History Weekly Update. I created it so I could have a better understanding of the point-of-view of the inhabitants of that world as I work on my entry. Thought I would share.
Posted by Sean at 18:23